By Michelle Fortin on November 20, 2012 in Camille

I’m sharing Miss Camille’s birth story in segments because, well, I have two under two now and only so much time for blogging (sniff sniff!). Also this… 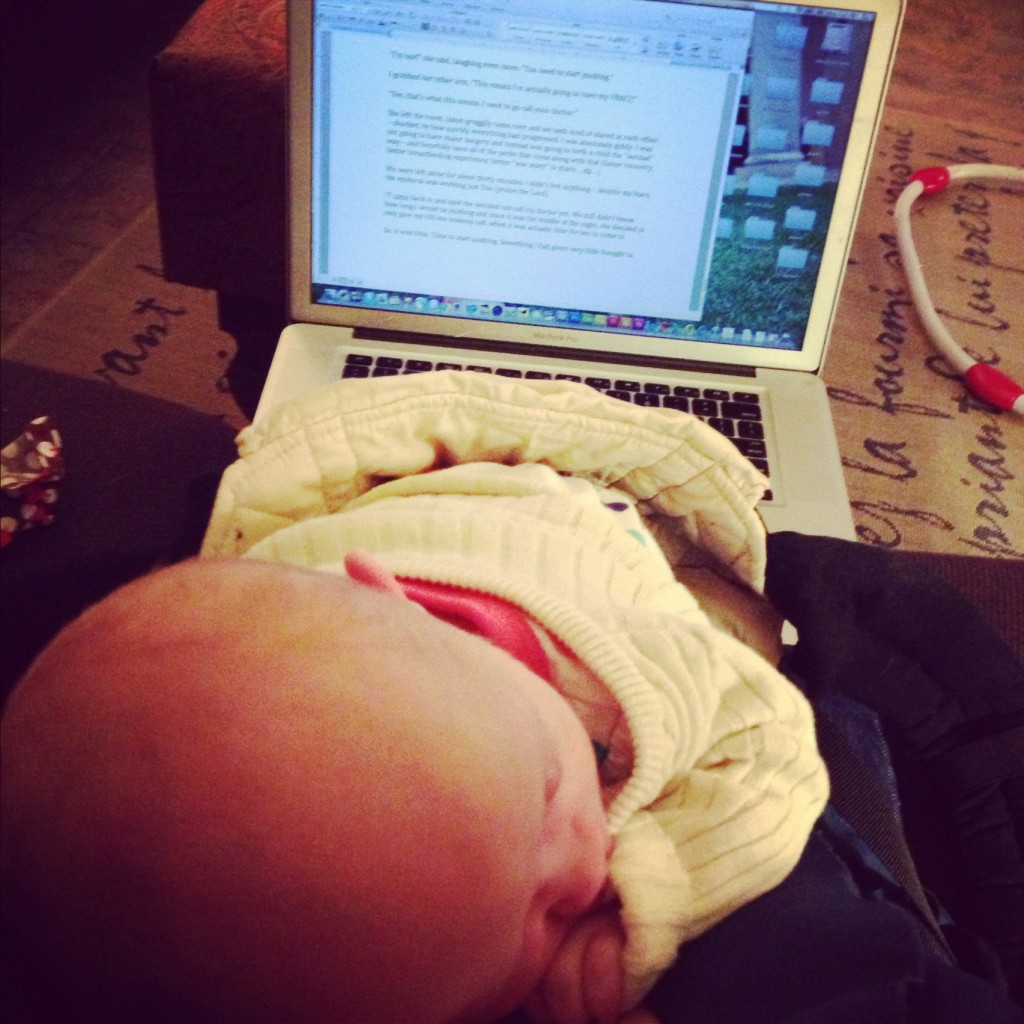 This girl is a serious snuggler. The Ergo is our BFF. It’s difficult to type around a snoozing newborn. I was hoping to finish her story today, but no dice. Maybe it will be my Thanksgiving present to you – or maybe Christmas. We. Shall. See.

We left off last time with finding out my water had indeed broken. I found out that important fact at 5:00pm, when it probably happened (or started happening – read the last post) at 10:00am. In my defense, this breakage of water was way different than Kenton’s birth story. In that case, my water gushed like a broken dam all over the… shower (convenient). This time, my water broke in smaller gushes, starting at my OB’s office, but they told me it wasn’t my water and I BELIEVED THEM. Still not sure how that happened – it’s a question I plan to ask at my six week appointment.

So, seven hours and several gushes of fluid later, I had finally dilated to… drumroll please!… one centimeter. Wah-wah-waaaaaahhhhhh! I had also gone from 60% to 80% effaced. Not exciting… but it was progress. My OB was pleased my body had done something on its own and we were all still hopeful for a successful Vaginal Birth After Cesarean (VBAC).

So, we set a plan in motion. 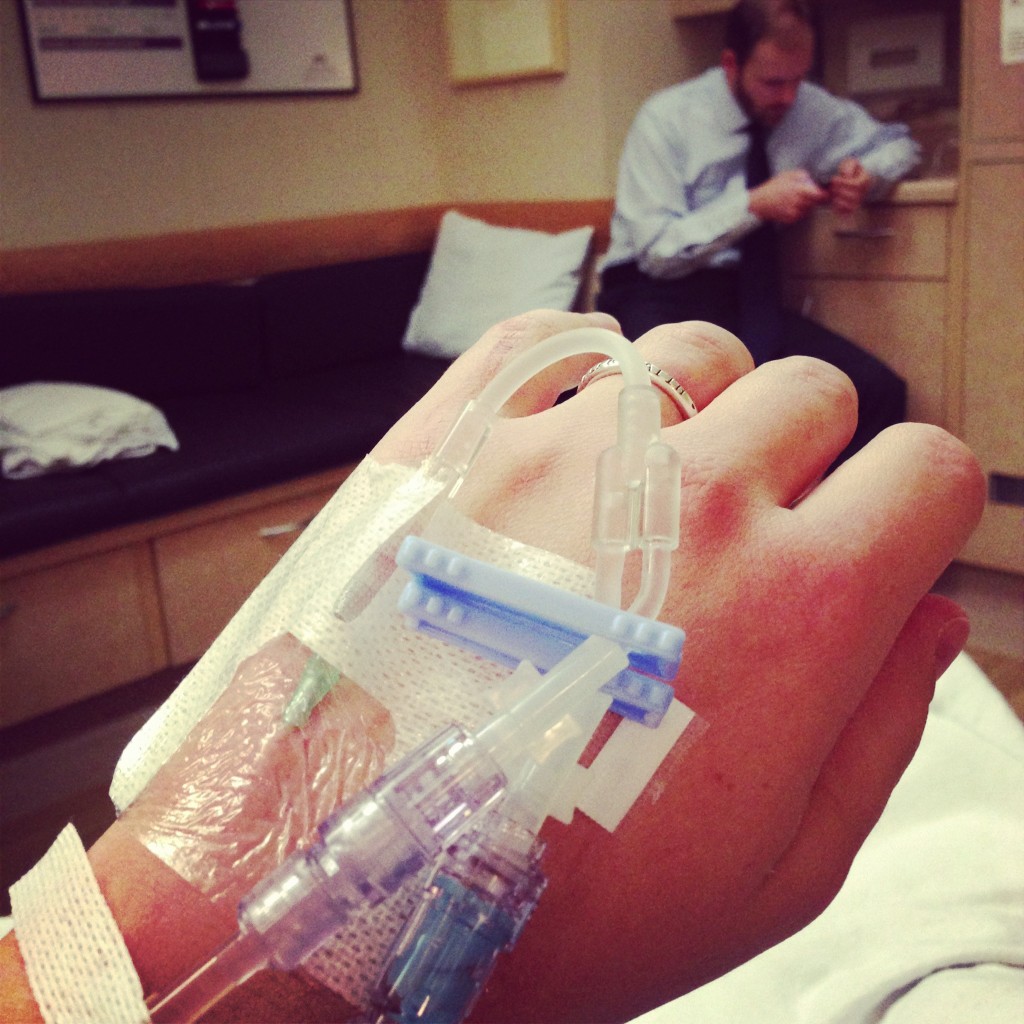 First, we started a slow Pitocin drip. The idea was to let me slowly labor all night, then around 4:00am we would up the Pitocin and have a baby sometime in the morning. This plan would give my body a chance to slowly dilate and increase my VBAC chances.

It sounded like a good plan, but I was still pessimistic about the VBAC. The beginning of this birth story was eerily similar to Kenton’s. My water had broken, but my body wasn’t laboring on its own. I needed Pitocin to help get the contractions going. Last time, that ended with a baby in distress and an emergency c-section. I had so hoped for a “normal” experience this go-round, but that wasn’t happening. But – how many birth stories are actually normal anyway?!

With the Pitocin in, I started feeling contractions pretty regularly. They were manageable and at first I kept talking right through them. Jason was by my side the entire time. My mom stopped by with Kenton. I was so happy to see him! Since he had spent the previous night at my parent’s house, I had not seen him in more than 24 hours, so it was a sweet reunion. 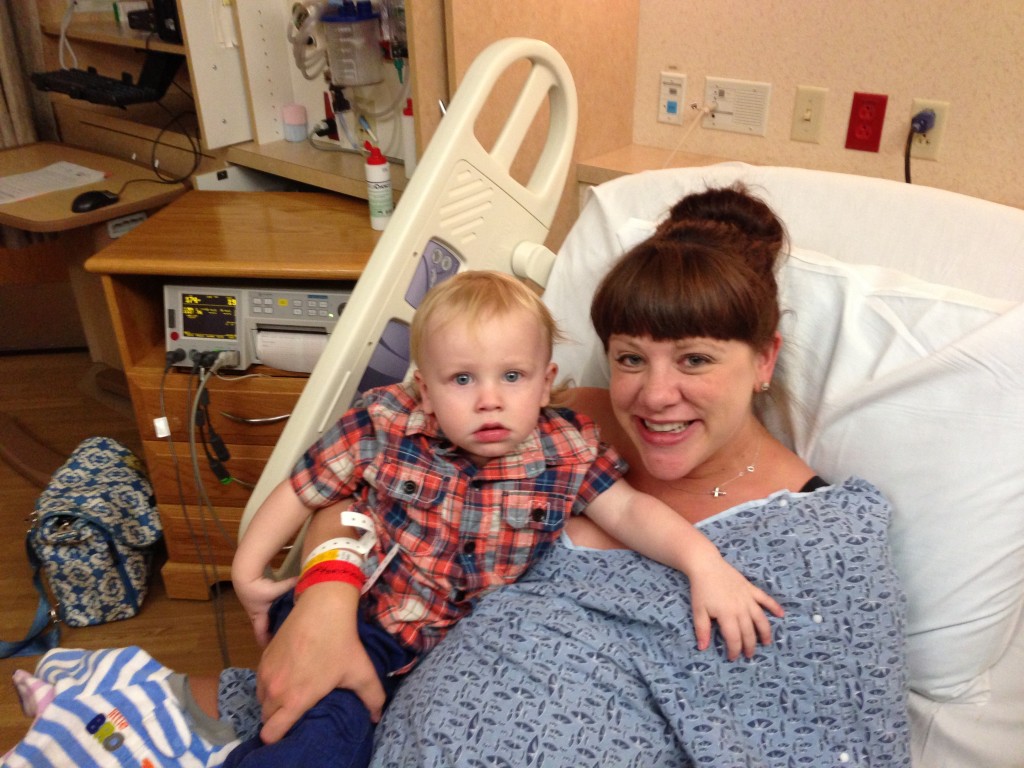 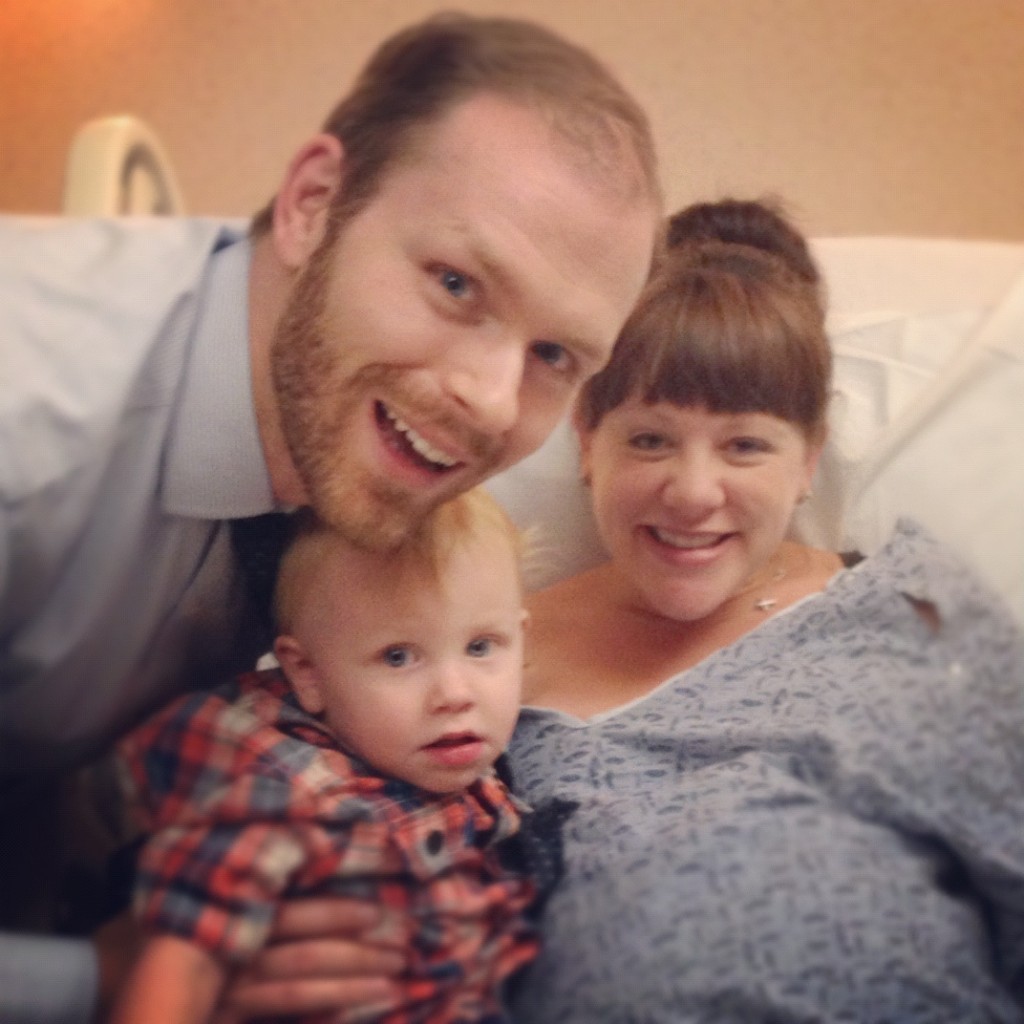 My mom had him in a new outfit (since I hadn’t packed enough clothes for him!) and she brought two sleepers for us… one that said “Little Brother” and the other, “Little Sister” – we were all starting to get really excited about which one we would need. Although, we were fairly certain which one we’d be keeping.

Jason and I were still convinced we were having a boy. We had a boy’s name picked out, but were still deciding on a middle name. Most of our private conversations that evening involved tossing out different boy middle names. We had three girl names selected and briefly discussed those – enough to eliminate one name. We were undecided on girl middle names – but didn’t bother discussing those because we were certain we would be having a boy.

By 7:30pm, my mom had taken Kenton back to her house to put him to bed and my dad had arrived. My contractions were now intense enough that I could not speak through them – but were still manageable. My nurse explained the anesthesiologist was set to go into a C-section at 9:00pm. I had until 8:30pm to decide if I wanted an epidural before then. Otherwise, I would have to wait until about 10:30pm. So, for the next hour, I was able to carry on a conversation with my dad and Jason – with the exception of :30-:45 seconds of the actual contraction. They were coming every two minutes at that point. I felt they were manageable, Jason and my dad were encouraging – so 8:30 came and went and I never called for the epidural. My dad left shortly after that – convinced we were in for a long night.

I’m not sure what happened after that, but between 8:30 and 9:15pm, those darn contractions increased so much that I was DONE. I threw in the towel at 9:15 and was decidedly out of luck for at least another hour.

My nurse, Stephanie, mercifully turned off the Pitocin, which barely helped. My body had taken the hint and labor was in full swing. The pain, for me, was intense. The contractions were really difficult. They lasted :45-:60seconds and were coming every other minute. I was not mentally prepared for drug-free labor. However, I learned quickly that if I tackled the contraction head-on as it started, I could control and manage how I handled the pain. If I lost concentration, the pain was much, much worse. For the next 90 minutes, I impressed myself by how I was able to handle intense labor. I also realized just how wimpy I was with Kenton’s labor. This time, I was much better focused and handled the situation really well… as long as the room was perfectly quiet and no one touched me. HA! It also helped (tremendously) that I knew I would be getting relief in the near future!

Around 10:30pm, Stephanie (finally) gave me some pain meds through my IV. They took a good amount of the edge off, but just 15 minutes later, my hero emerged, the anesthesiologist! Angels started singing from the heavens and my epidural was inserted at 10:45pm. I felt immediate relief. I slowly emerged out of my very somber/intense state and started thanking everyone in the room, profusely.

However, I was only at 3cm. Even though the amount of pain I experienced told me I should be further along – it was actually good news. I made progress (despite having turned off the Pitocin) and it was slow progress – just what the doctor ordered!

With the epidural on board, I was finally able to rest, as was Jason. We turned off the lights and I drifted off on my side in the hospital bed while Jason tried to get comfortable on the “cot” that’s actually a bench with a thin pad. Stephanie was planning to come back and check my progress at 2:00am. 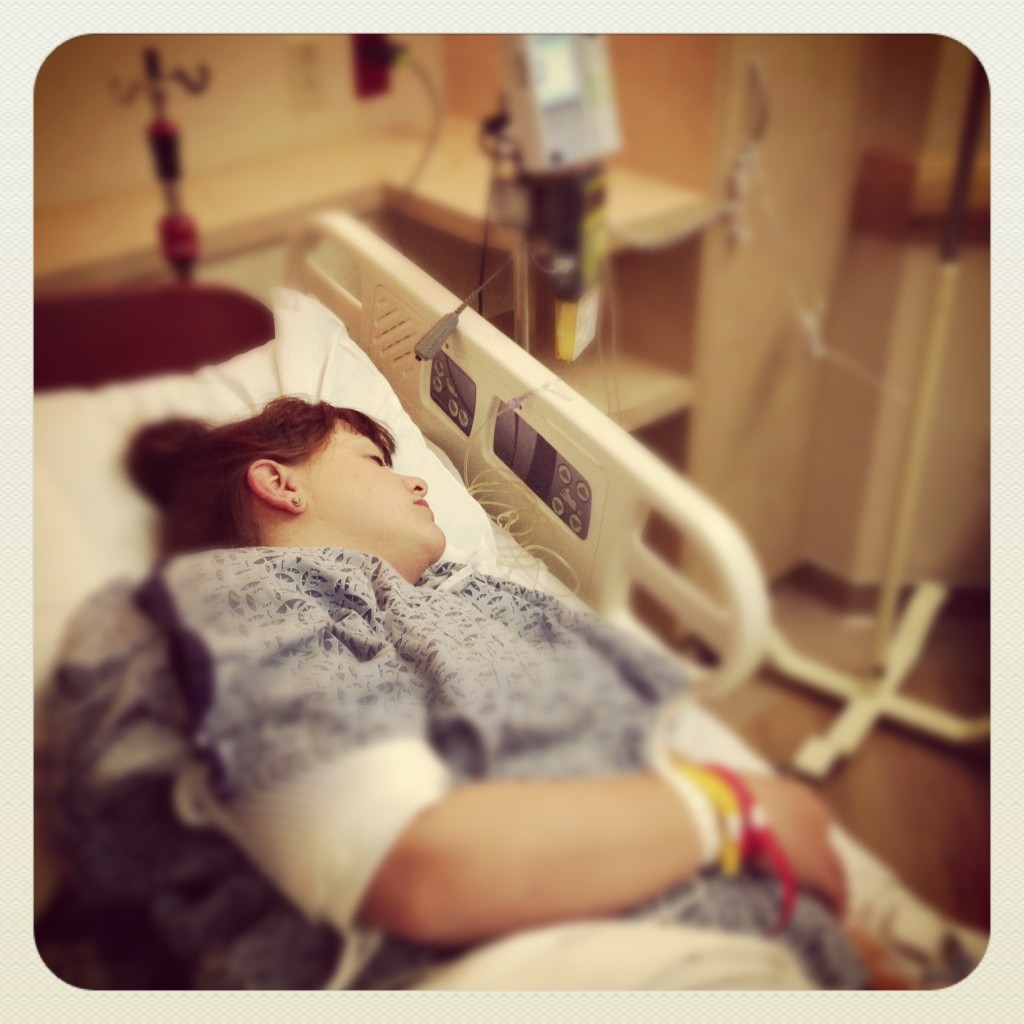 I rested, but didn’t really sleep – I was too excited! I began noticing I could feel the pressure of contractions on the left side of my body, but not the right. At first, I ignored it – but then began to fear the epidural was failing. So, I rang for a nurse – it was 1:00am.

Stephanie came in and said she would flip me over to the other side to see if that would help. (Once that epidural is in, you can’t really flip yourself from one side to the other without assistance.) After she helped flip me, she decided to check my progress, even though it was an hour early. Because my water had broken, they were only checking my progress when necessary to avoid infection.

As she began to check, I watched her face intently – hoping for good news.

Suddenly, she dropped her head dramatically, and swung it back up with a loud laugh.

“You’re not going to believe this,” she laughed.

“What? What’s wrong?” I started to get nervous.

It had only been two hours since the epidural – when I was just 3cm.

“I’m not!” she said, laughing even more. “You need to start pushing.”

I grabbed her other arm, “This means I’m actually going to have my VBAC?!”

“Yes, that’s what this means. I need to go call your doctor.”

She left the room. Jason groggily came over and we both kind of stared at each other – shocked by how quickly everything had progressed. I was absolutely giddy. I was not going to have major surgery and instead was going to birth a child the “normal” way – and hopefully have all of the perks that come along with that (faster recovery, better breastfeeding experience, better “war story” to share… etc…)

We were left alone for about thirty minutes. I didn’t feel anything – despite my fears, the epidural was working just fine (praise the Lord).

Stephanie came back in and said she decided not call my doctor yet. We still didn’t know how long I would be pushing and since it was the middle of the night, she decided to only give my OB one wakeup call, when it was actually time for her to come in.

So, it was time. Time to start pushing. Something I had given very little thought to. I figured the nurses in the hospital would tell me what to do – seeing as that what they did for a living, every day. Best just to trust them and do what they say. And… that’s what I did. I followed instructions as best as I could… pushing three times during each contraction. Stephanie and Jason were so encouraging. They both kept telling me I was doing a great job. Jason was clearly impressed by how I was handling everything – which just made me feel more confident and comfortable. Stephanie’s encouragement felt amazing because I could tell she was sincere and she did this for a living – and I realized this was probably the only time in my life I would experience this. (Oh yeah, we’re DONE.)

I pushed three times per contraction for about 20 minutes. Yes, I was watching the clock. I grunted through my first push of a contraction. Took a breath and started push number two…

“STOP!” Stephanie had that same look on her face she had when she discovered I was fully dilated hours ahead of schedule. “You need to stop.”

“Okay. What’s going on?” I really couldn’t feel much – no pain, just pressure (just like everyone says).

“Your baby is about to come and I need to get your doctor here.”

So, with that, I was left waiting for THIRTY MINUTES. I felt the pressure of every contraction during that half hour with the intense urge to push every single time – but I had to hold back. That was incredibly difficult.

Finally, my OB arrived – in scrubs, no makeup, and seemingly amused.

“Wow,” she began, “You’re having a baby a bit sooner than we all anticipated. You ready to keep pushing?”

HELL. YES. LADY. WHATTOOKYOUSOLONG? GET THIS BABY OUT OF ME. NOW. RIGHT NOW.

I pushed through two more contractions… and then… 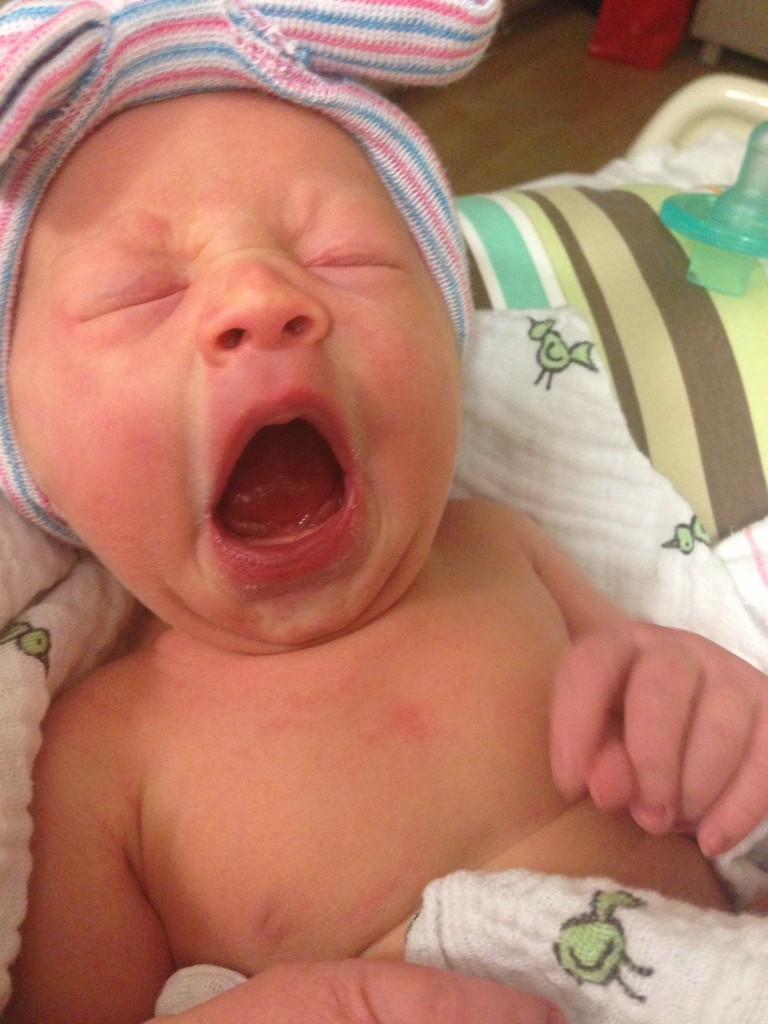