By Michelle Fortin on November 29, 2012 in Camille

This is the final installment in the drawn out birth story of Miss Camille. You can read part one here and part two here – or you can read the whole darn thing, start to finish, right here. Yep, I’ve given the longest birth story in history it’s very own page. Seemed appropriate. 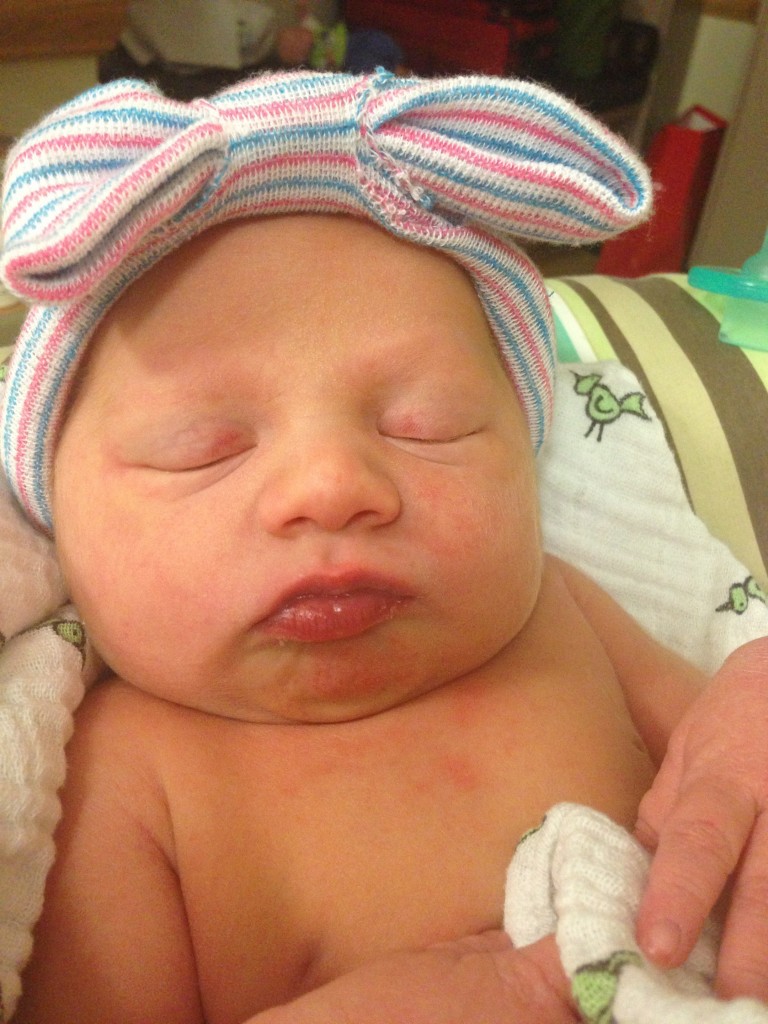 In all, I pushed for a total of 25 minutes (with a half-hour “pause” in there) and our baby emerged. Jason broke our “eyes up HERE” rule because he was so enamored with the process. Because he was looking, he caught the scary sight of the cord around our baby’s neck. Our OB cast a glance his way, quickly slipped it off and reassured Jason it was okay. (I missed that moment in real life – but saw it on video. No, you will never see that video. Don’t ask.)

Immediately, the baby was put on my tummy and looked up at me, straight into my eyes. Eye contact with my sweet baby immediately = BEST. MOMENT. EVER.

The baby was turned toward Jason when “it” was put up on my tummy and as I was lost in those dark blue eyes, I heard my husband say as casually and matter of fact as anything he’s ever said,

To say I was shocked would be the understatement of the century.

“Are you sure? Maybe the penis is just hiding?”

So, I looked, and sure enough – GIRL.

I immediately started bawling my eyes out and kissing her all over her head and face… as she screamed beautiful healthy baby screams.

For the record, I’m sure I would have had the same reaction if “it” was a boy – but there was something magical about the shock factor that made everything about that moment incredibly special.

I got to hold my baby girl for about 15 minutes. I just kept saying, “I love you” over and over. I also told her how much her big brother was going to love her. This skin to skin time was one of the primary reasons I was so incredibly grateful for a VBAC. Also, we could do delayed cord clamping/cutting. Jason cut the cord after it stopped pulsing. 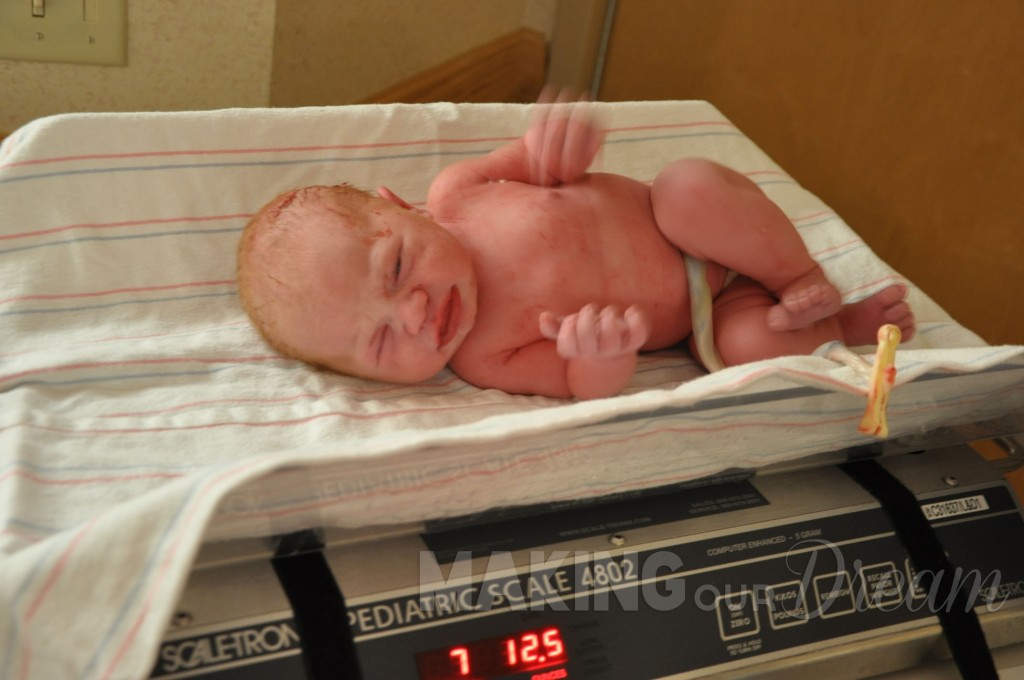 They wiped her down – and the nurse declared,

“A WHAT?!” I didn’t notice the red hair at first because… let’s be honest… she was covered in blood when I was holding her. I just assumed she had blonde hair like her brother. But, Jason clarified things for me…

That drew lots of ooh’s and ahh’s from everyone in the room… apparently, it’s not too common. 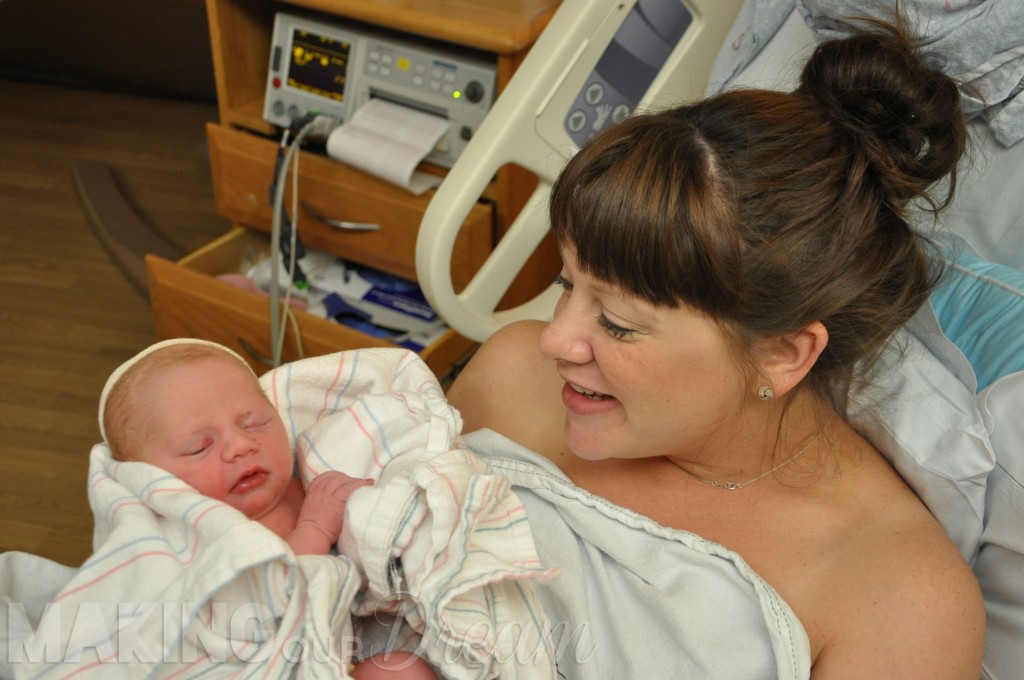 When she was back in my arms a few minutes later, I started nursing her. She took to it right away and stayed latched for 90 minutes! Of course, she probably wasn’t eating that whole time, but she did get some food in her belly and lots of bonding with momma. I immediately had hope that this breastfeeding experience would be leaps and bounds better than last time (and it has been!).

At some point during this baby-high, I realized my OB was still… eh-hem… “working.” She seemed deep in concentration, possibly concerned. I decided to check in on her…

“How’s it going down there?” I don’t know, it seemed like a good start.

“Are you a bleeder? When you cut yourself, do you bleed a lot?” she responded, not looking up.

Clearly, that was encouraging.

“Is there a problem?” I tentatively asked.

“You’ve lost… er… you’re losing a lot of blood,” she said, matter of factly – never looking up from her work, which I now noticed was somewhat frantic.

“Okay,” I glanced down at the precious bundle in my arms. “Am I going to need surgery?”

“No, no surgery, but possibly a transfusion.”

Actually, a transfusion sounded better than surgery and definitely sounded like something I would survive to continue mothering my precious kiddos. Yep, a transfusion was okay – worth it. No problem. Sign me up.

More than an hour passed after our baby’s birth, our nurse made several trips out of the room for more supplies… and finally, she declared me done. Transfusion not needed. My “battle wounds” were not particularly deep/severe, there was just a lot of them and they bled a lot – and I had a hemorrhage. In all, I lost 1200cc’s of blood.

Not unless you consider the fact most women lose between 300-500cc’s of blood during childbirth.

My OB said it best…

“You have the most boring pregnancies and dramatic births.”

Just trying to keep you on your toes, doc.

The time she spent working on me was not particularly scary or stressful. Jason and I were enamored with our daughter and the fact, WE HAD A DAUGHTER. It was, however, awkward to make any joyous phone calls while she was clearly working feverishly. So, instead of calling our families to tell them the good news, we talked about something kind of important – what on earth were we going to name this child?

As I said before, we had a boy’s name ready to go. Well, we could scratch that now. (It was going to be Anders, by the way.) We had two girls’ names…

Genevieve Grace, we would call her Gigi, was “the” girls name for years. Jason mentioned it once while we were dating and I was sold. If Kenton had been a girl, well, we’d have an almost-18 month old “Gigi” running around right now. At some point, the name Camille was tossed in the mix and during this pregnancy it grew on me – and began to shove Genevieve aside. We tossed around a few middle names for Camille…

Eileen was my grandmother’s middle name. My dad’s mom who died when I was 16. I loved the sound of Camille Eileen and the family connection was appealing. But… we never discussed these name possibilities seriously… Because we were sure Baby Anders would be joining our family.

But, here we were with a baby girl. And we had to make a decision. 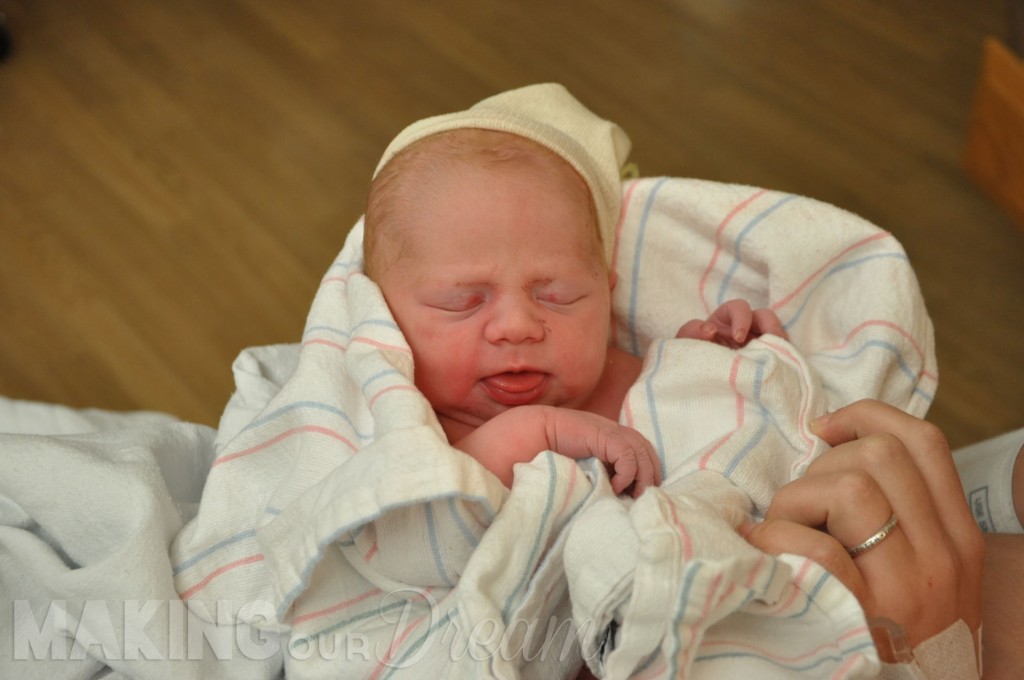 As soon as they told me she had red hair, I was drawn to Camille Eileen. My grandmother had red hair and, to me, that seemed like a lovely connection. However, I honestly liked all the names equally. I told Jason to pick. He hesitated.

I reminded him that I basically picked Kenton’s name. I wanted our son to have the same initials as my dad, KAF – and Kenton was the only boy “K” name that we liked. He remembered and agreed it was his turn.

I was certain he would pick Genevieve – so I was surprised when he walked over, took a long look at our daughter and declared, “She’s Camille Eileen.”

It was perfect. She is perfect. 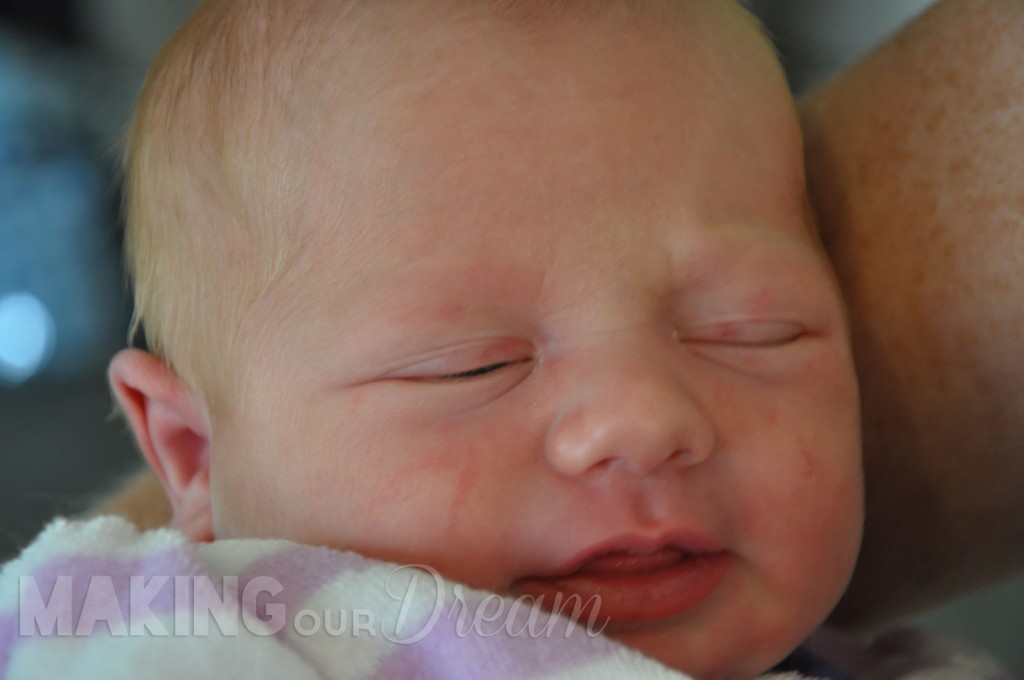 Back to reality, it was time for me to move out of the L&D room and upstairs to recovery. The nurse came to put me in a wheelchair. I stood up, turned, sat down, and immediately lost control of my body. My head fell back, my limbs became heavy, I could hear everything, but I couldn’t communicate. That really sucked, because the nurse called for someone to bring the “smelling salts” and I knew I didn’t want to smell those, but I had no choice. But, they did the trick and snapped me out of it… enough to get back in bed. Which I did and immediately went straight to sleep.

Apparently, all that blood loss was catching up to me.

Jason and Camille spent that time bonding while I rested. A couple hours later, they were able to transition me upstairs – but on orders of 24 hours of bedrest and an extra night in the hospital for observation. Also, ice packs, lots of ice packs – and drugs, the good kind (for 24 hours, then it was the not as good stuff).

A full VBAC vs. C-section post is for another day. But, I will say I’m glad I was able to do a VBAC and even though my recovery was (and still is) a bit more involved than the average gal – I don’t regret it for a minute. I would take that over C-section recovery fo’ shizzle, especially with an active toddler at home.

Speaking of, the first thing I did when I got home… was scoop up this little munchkin… 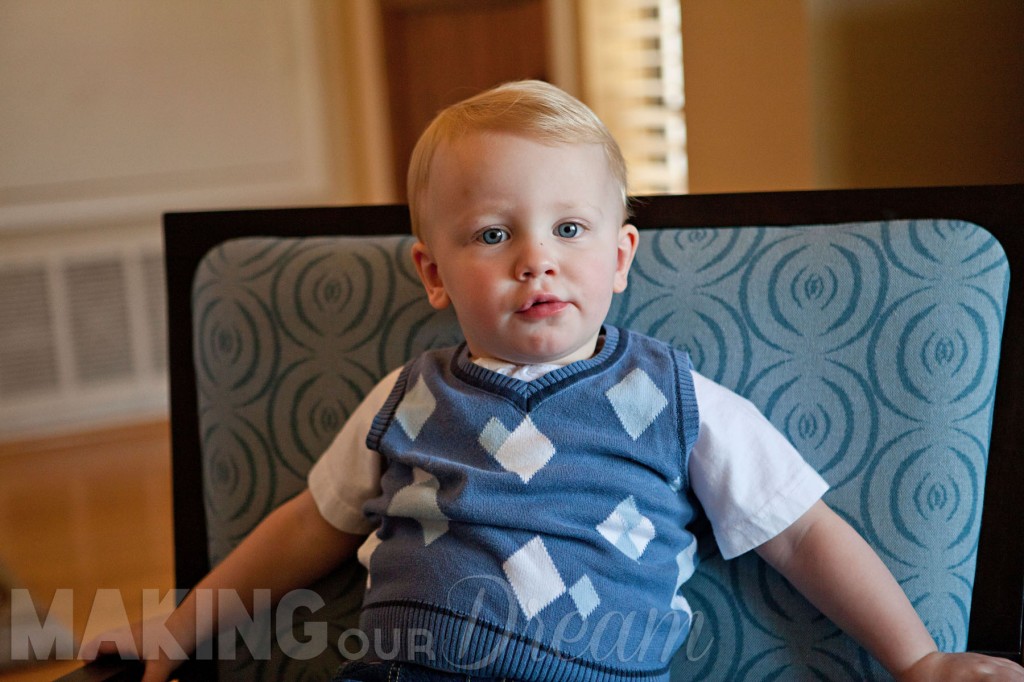 Which was exactly what drove my desire for a VBAC in the first place.

I’m not going to be shy about it, I’m pretty darn proud of myself. As I should be, Amen? 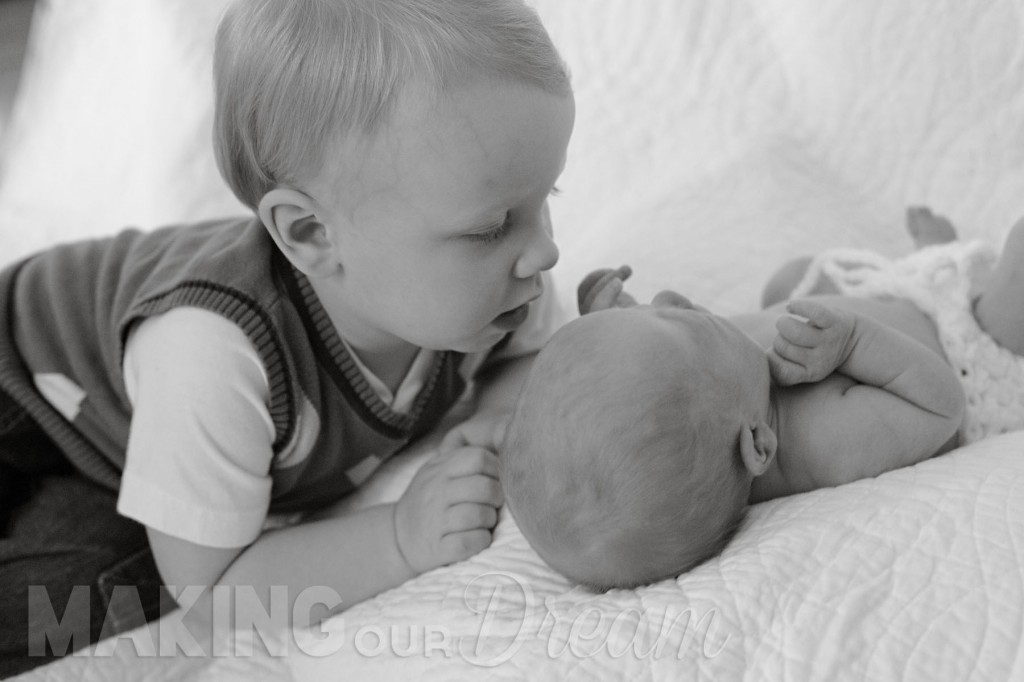 I am one blessed momma, with an incredible life. I could not be happier.