That one time when I came home with a huge piece of crown moulding and told Jason, “THIS WILL BE PERFECT ABOVE OUR TV! I can’t wait to see how you do it!” Then I left it in the garage and patiently waited for him to do something with it. And he didn’t for a long time. But then he did. And it was hard, but worth it because it turned out AWESOME and he didn’t even get mad at me for doing that to him. TRUE LOVE. 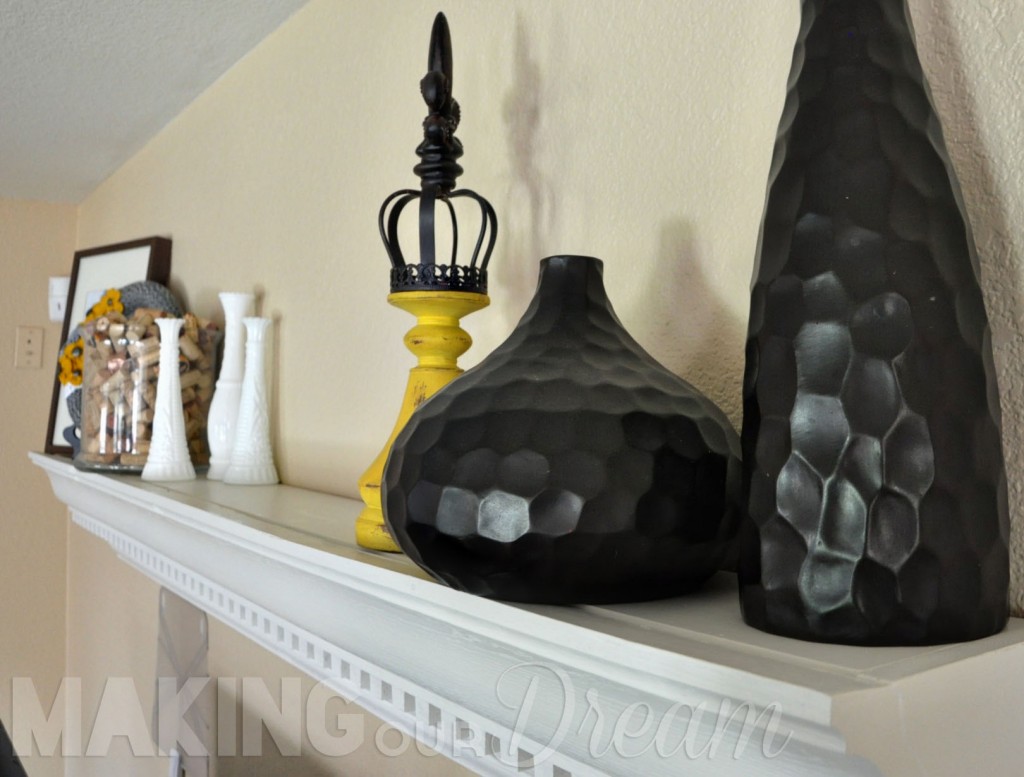 Here’s how it all went down.

The area in our family room where we have our TV was BLAH. Seriously boring. 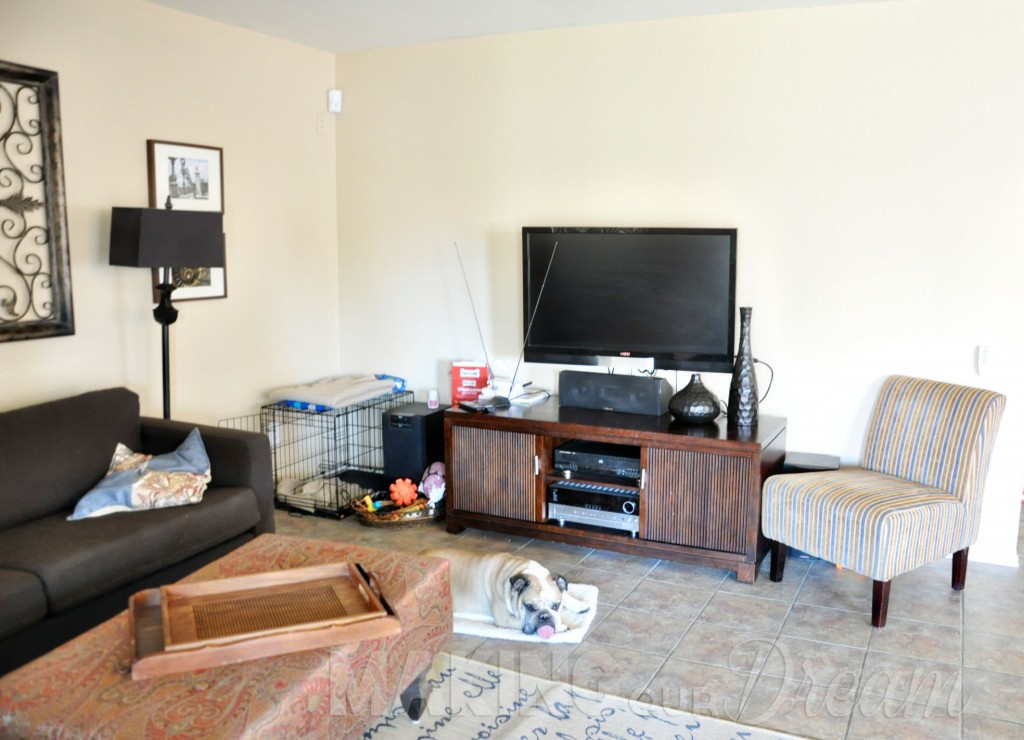 It had been bugging me for some time. We thought about having a drywall niche built, but that’s expensive and ultimately decided adding some shelving above it would be more cost effective and still look good – if we could find the right piece.

Cue: a woman on a mission.

I was determined to find just the right unique-funky-but-classy-mantle-shelf-combo-something-or-other to fill that space.

In a previous post, I mentioned that this was on my wish list when I went to a Junk in the Trunk Vintage Market back in the fall (don’t remember exactly when, but I do remember being VERY pregnant! So, it was September or early October). I looped the market three times, found nothing for this space (I did find some other fun things!), and turned to go back to my car when I saw her. 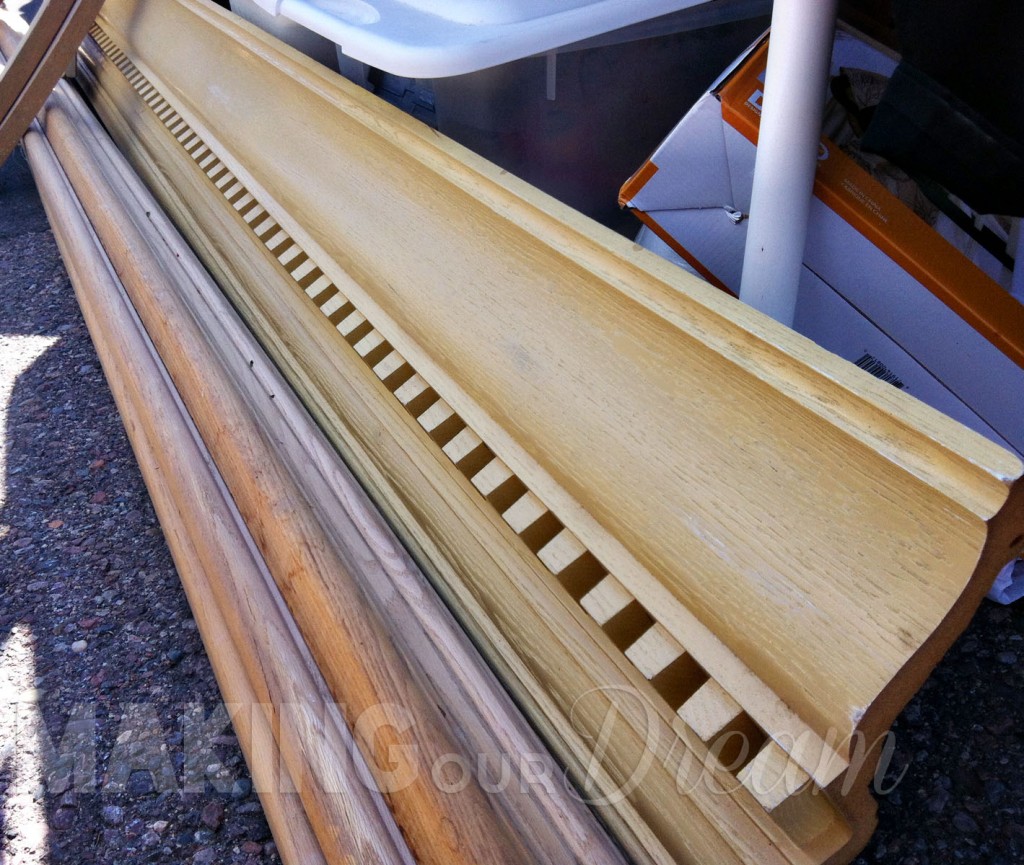 One of the vendors had these random, huge pieces of crown moulding stashed beside her display area. It was perfect! I bought one 10-foot section for $50 and was ridiculously excited. So much so, I took a sillly selfie in the car… 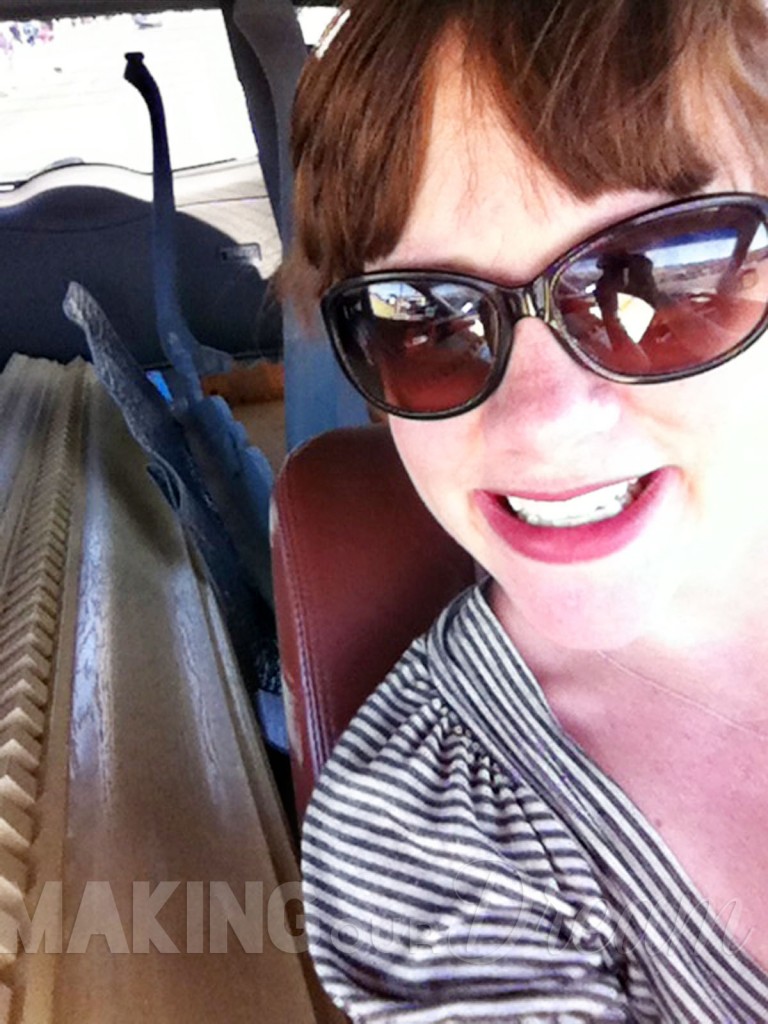 I brought her home and did a happy dance for Jason – who was not nearly as impressed as I was. He asked if I’d considered how -exactly- this would become a shelf or mantle? Nope. Had I thought about how to cover the intricate side? Nope! That’s why I married the handiest-hunkiest man on the planet.

The moulding then sat around, untouched, for months.

Finally, Jason caught the vision and got to work. 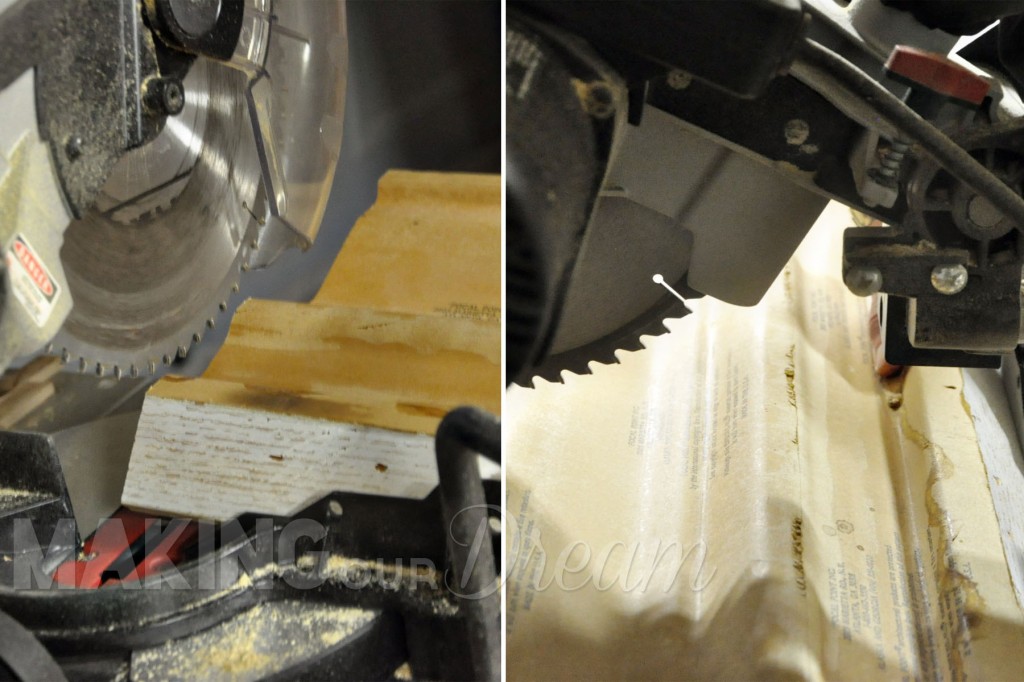 The moulding looks like wood, but it’s actually made from foam. It is super light and (thankfully) is durable enough to be handled just like wood. So, Jason used the miter saw to cut it to the right length. 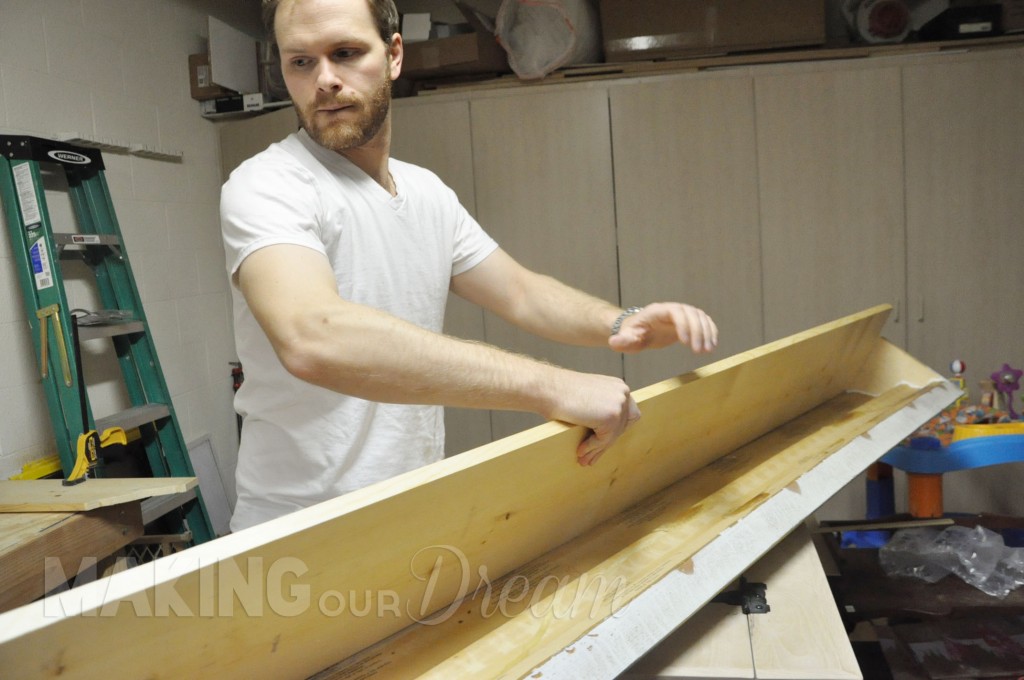 See what I mean by handy and hunky? Oooolala!

He got a pine board for the shelf portion and fit it in between the custom ends that he had to cut with a jig saw. This was the hard part… 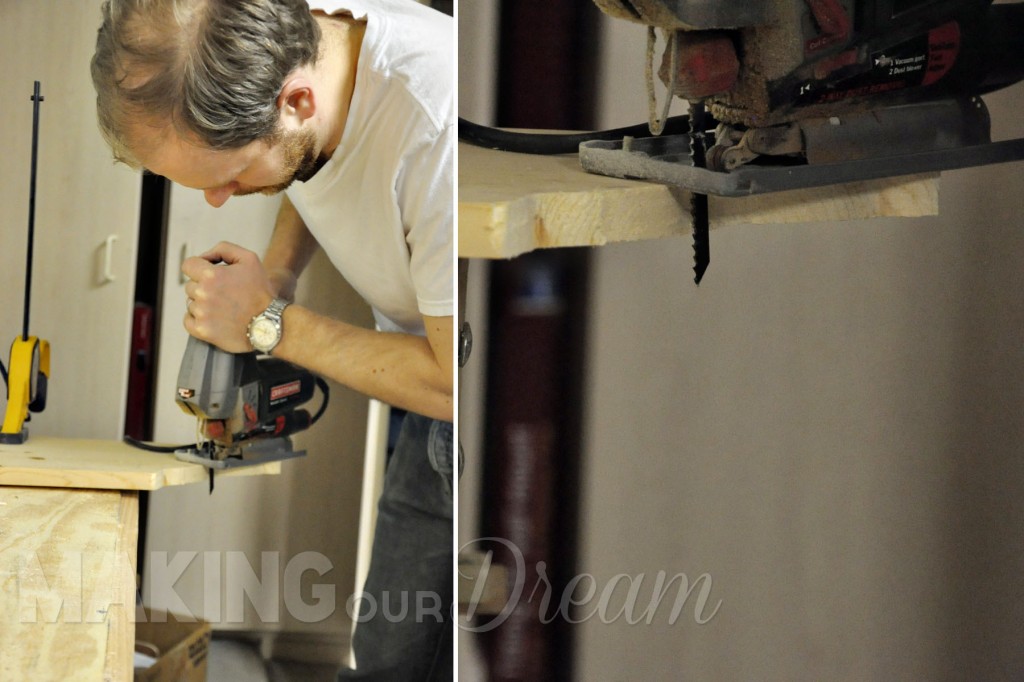 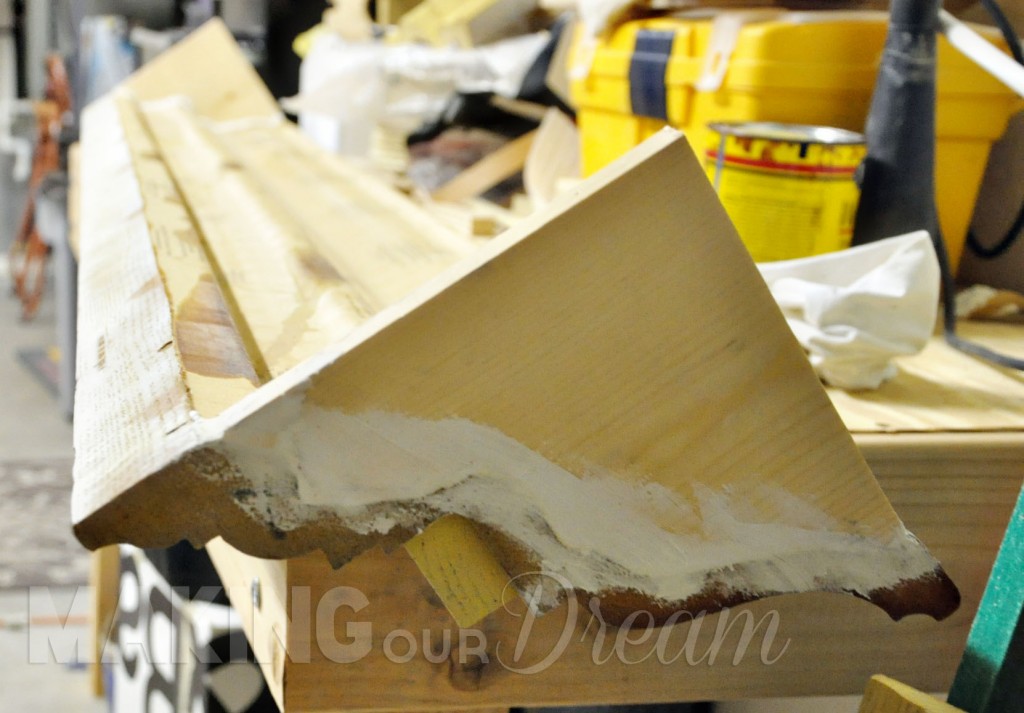 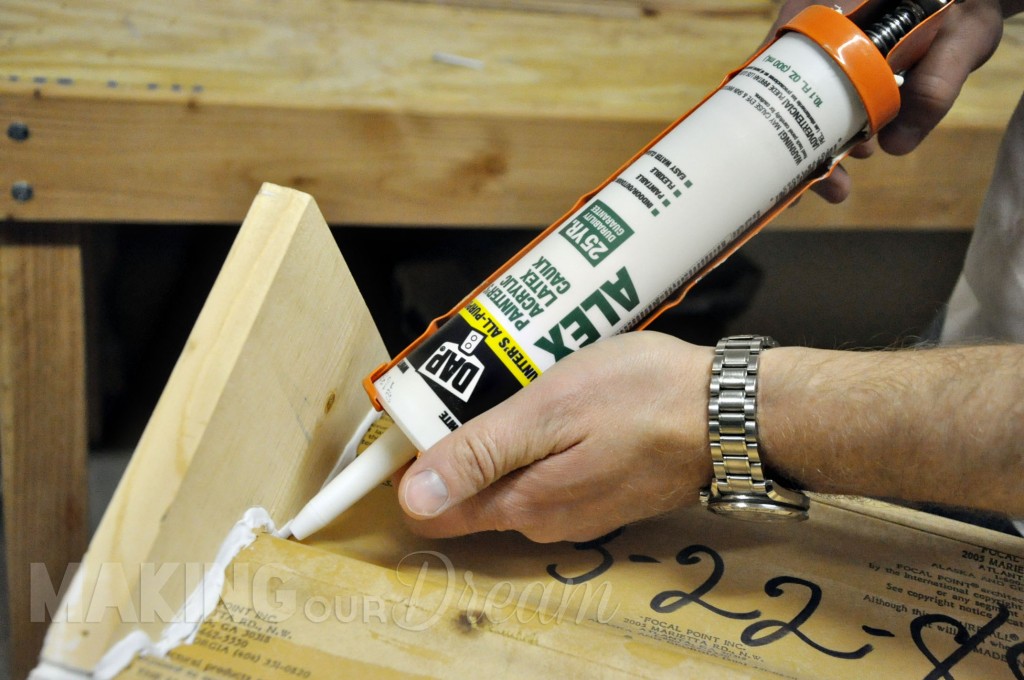 After the all of the parts were in place, Jason painted the mantle the same white as our kitchen cabinets. Since they’re in the same general space, we wanted some continuity. 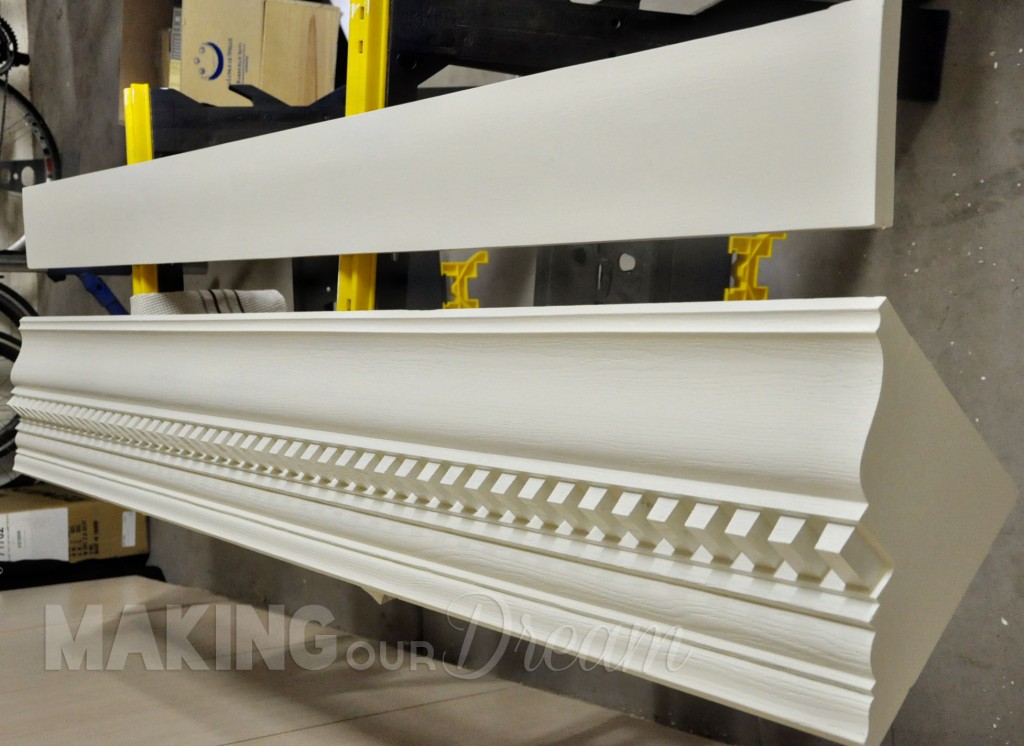 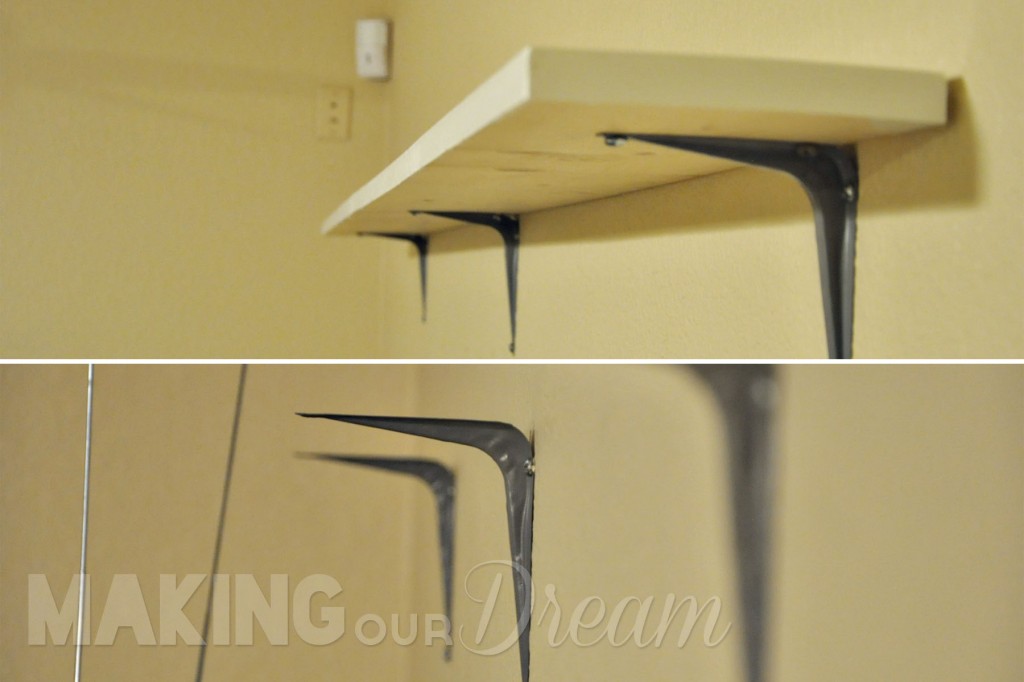 Once she was up, it was my turn again! 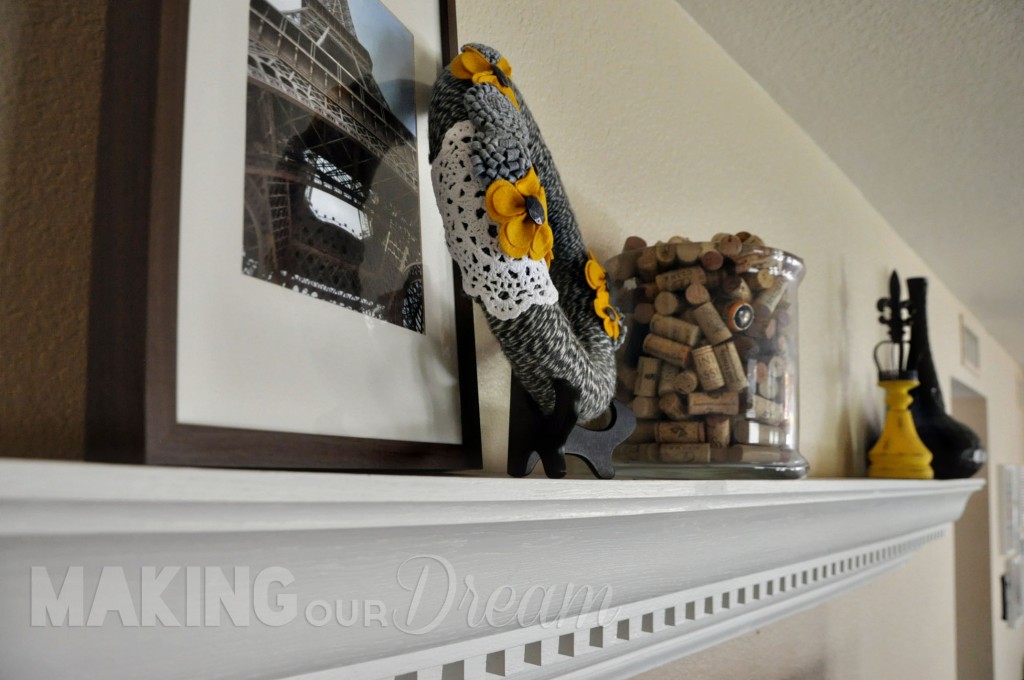 I had so much fun pulling different pieces together to fill the new mantle. 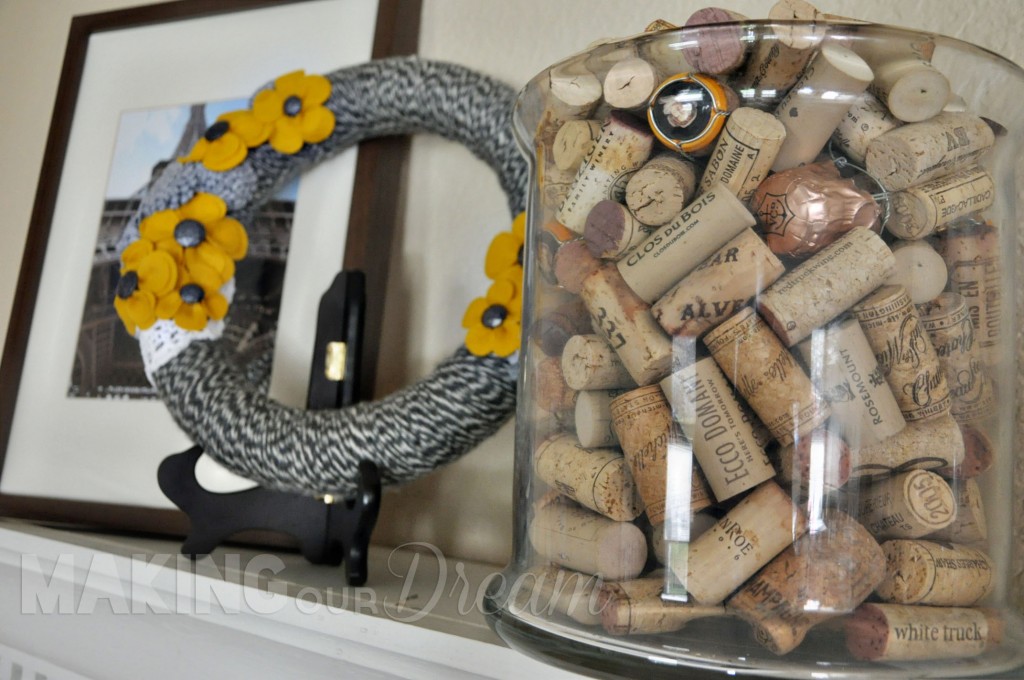 The wreath is from my buddy Morgan over at Mrs. Priss. She posted a picture of it on Instagram and I jumped on it so fast I think she probably thought I was crazy. But I LOVE it. It’s perfect up there. The apothecary jar with wine corks is something we’ve had for a while, in the living room on top of the bar. It took us weeks to get that collection. Okay, months. Okay, maybe longer. Maybe. 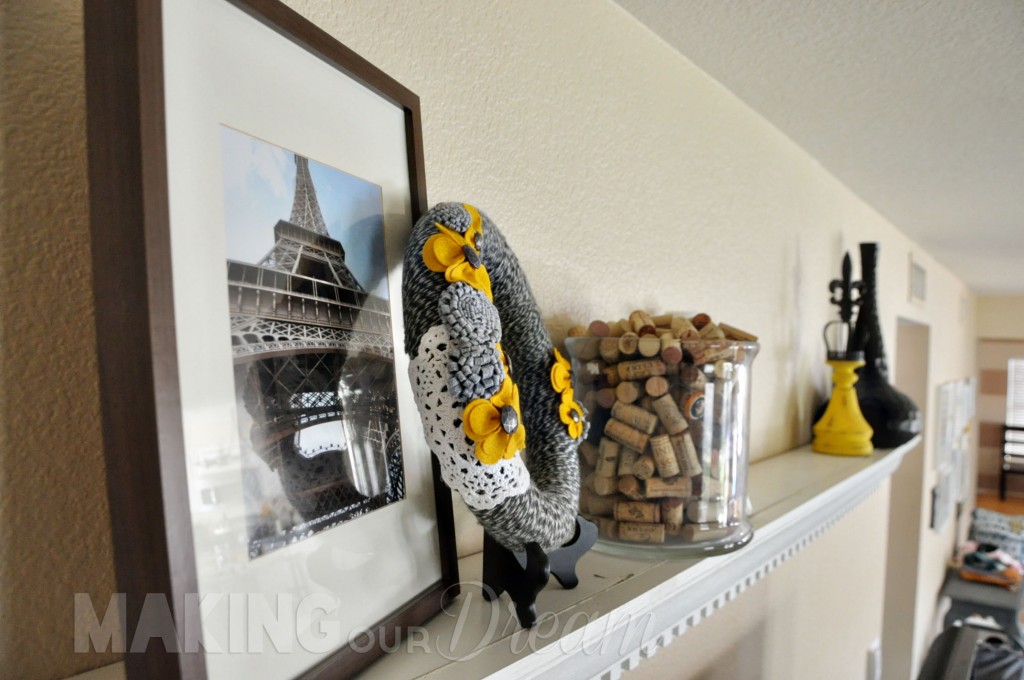 The Eiffel Tower pic is one I took during our trip to France. The frame is from Ikea.

We’ve had the black vases for a long time – they were originaly from Costco, of all places. The yellow decorative thingy is from Hobby Lobby and I picked up the milk glass vases at Goodwill.

So, most of the stuff I had on hand and I just bought the wreath and the yellow thing (what would you call it?). 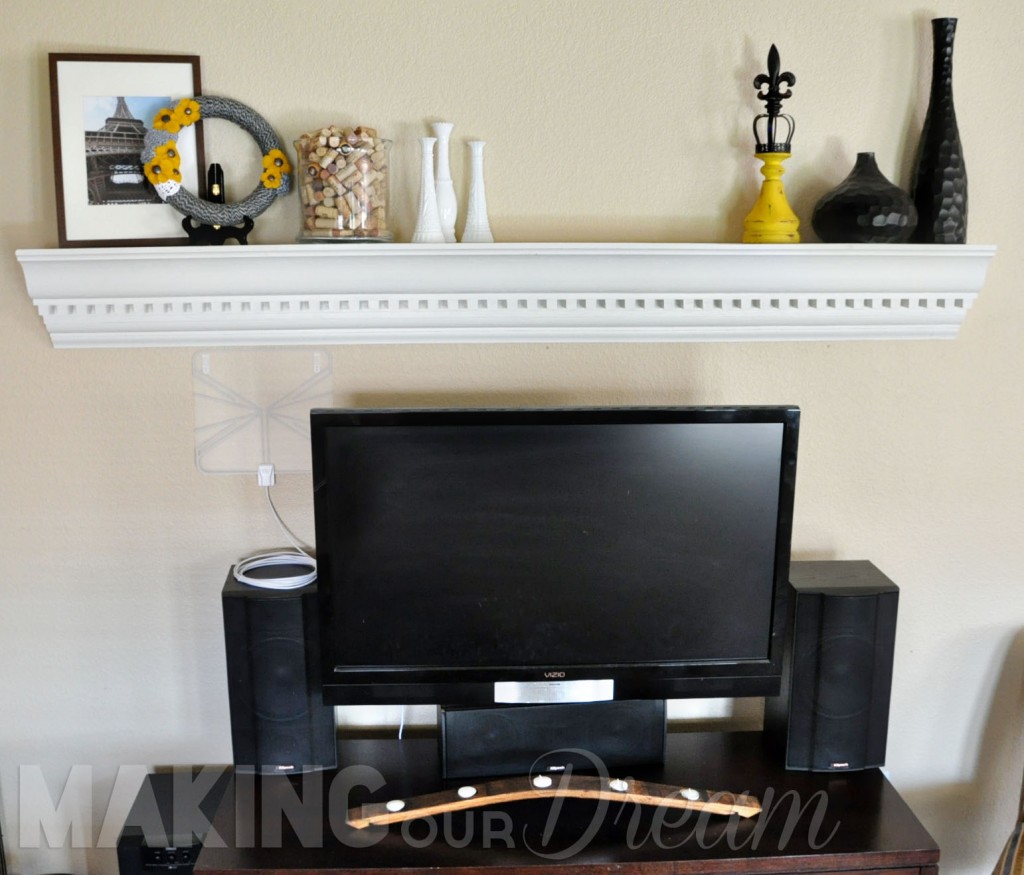 That weird thing on the wall is a new digital antenna. An alleged improvement over the rabbit ears (we don’t have cable) – jury is still out on that puppy. Not sure it really improves the signal.

I got this piece at Junk in the Trunk Vintage Market, which happens to be happening again this weekend! Hollah! 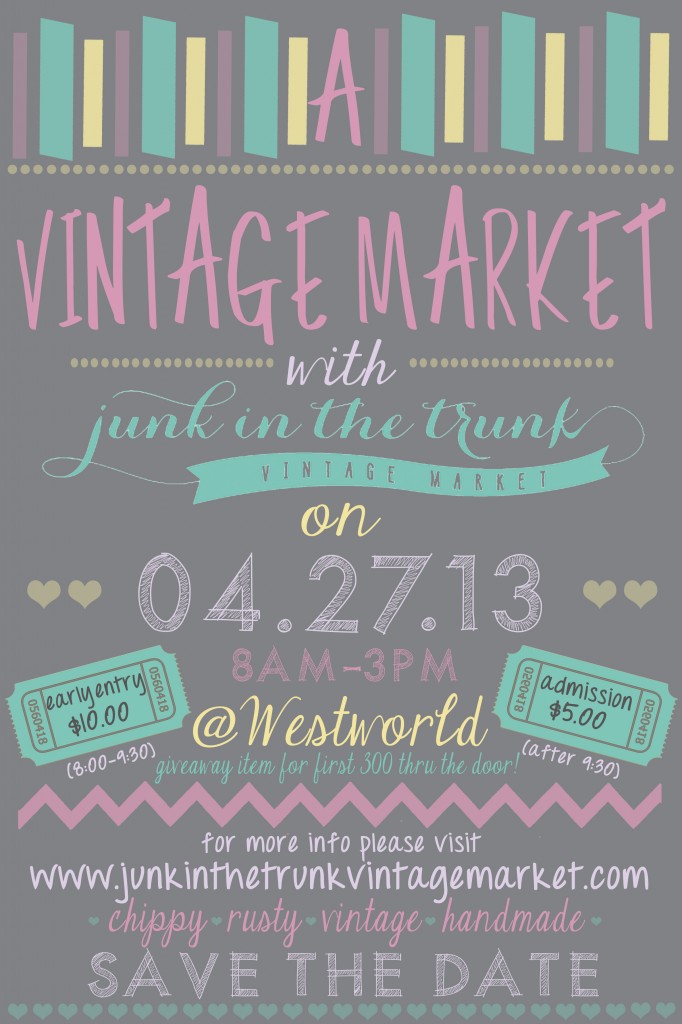 I’ll be there! I always manage to find something fun and I love the experience – plus the gals that put it on are super awesome. Anyone else going?