So… this post has been in the making for a couple of days. (AKA – it’s two days late). Whatever… It’s been an adventurous 39th week, including a little trial run to Labor & Delivery. Yet…. 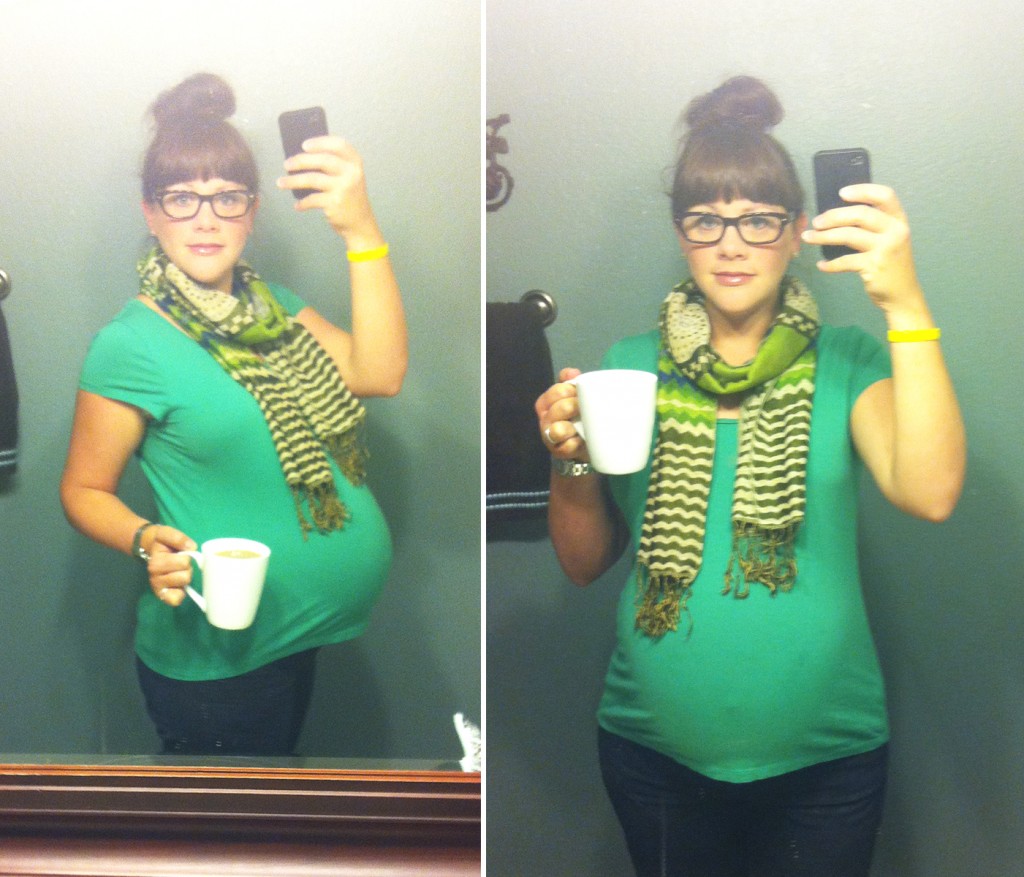 That’s my studious look, by the way. I haven’t exactly had time or felt like taking a bump pic the last couple of days – but finally forced myself to this morning. I wanted to show the front of the bump too – as it looks GINORMOUS from the side, and a lot smaller from the front. I still have a waistline (!), which shocks me. You probably can’t tell from this picture as I’m not even wearing a maternity shirt, but I know the truth. You’ll just have to believe me.

The differences between my two pregnancies are becoming more apparent the longer we go. Kenton was a maniac in the womb. Constant movement. I would barely poke my belly and he would respond with violent kicks and punches. This baby, notsomuch. I get an occasional kick, but not a forceful one – more of a strrrrreeeeeetch, then back to sleep. So, when this baby ramped up the movements Sunday and Monday this week, it was nice. I also had a few contractions and was hopeful those were signs that things were starting to happen.

Then, on Tuesday, nothing. No contractions and barely any movement from the bambino. I didn’t think much of it, but was more conscious of lying still (which is nearly impossible with a toddler on the loose) and doing kick counts. Overnight, I didn’t sleep well and didn’t feel the baby at all. I woke at 4:00am on Wednesday, went downstairs, drank a glass of cold lemonade and lay on my left side (Dr’s orders!) for an hour and felt exactly three “movements.” I say “movements” because they weren’t even kicks – they were subtle enough that it could have been a dead baby floating around aimlessly in there. Sorry, but that’s where our mind goes – right, mommies?

I called the nurse on call, who told me to head in to the hospital to be checked. I called my dad (the Dr) who confirmed that was a good idea. (That phone call also woke my mom who started heading our way to take care of Kenton so Jason could join me. Three cheers for having amazing, helpful family in town!).

So, I drove myself to L&D. Thankfully, there was no one else in triage – so I was seen right away. They strapped a couple of monitors to my belly and I immediately heard that strong, reassuring heartbeat. 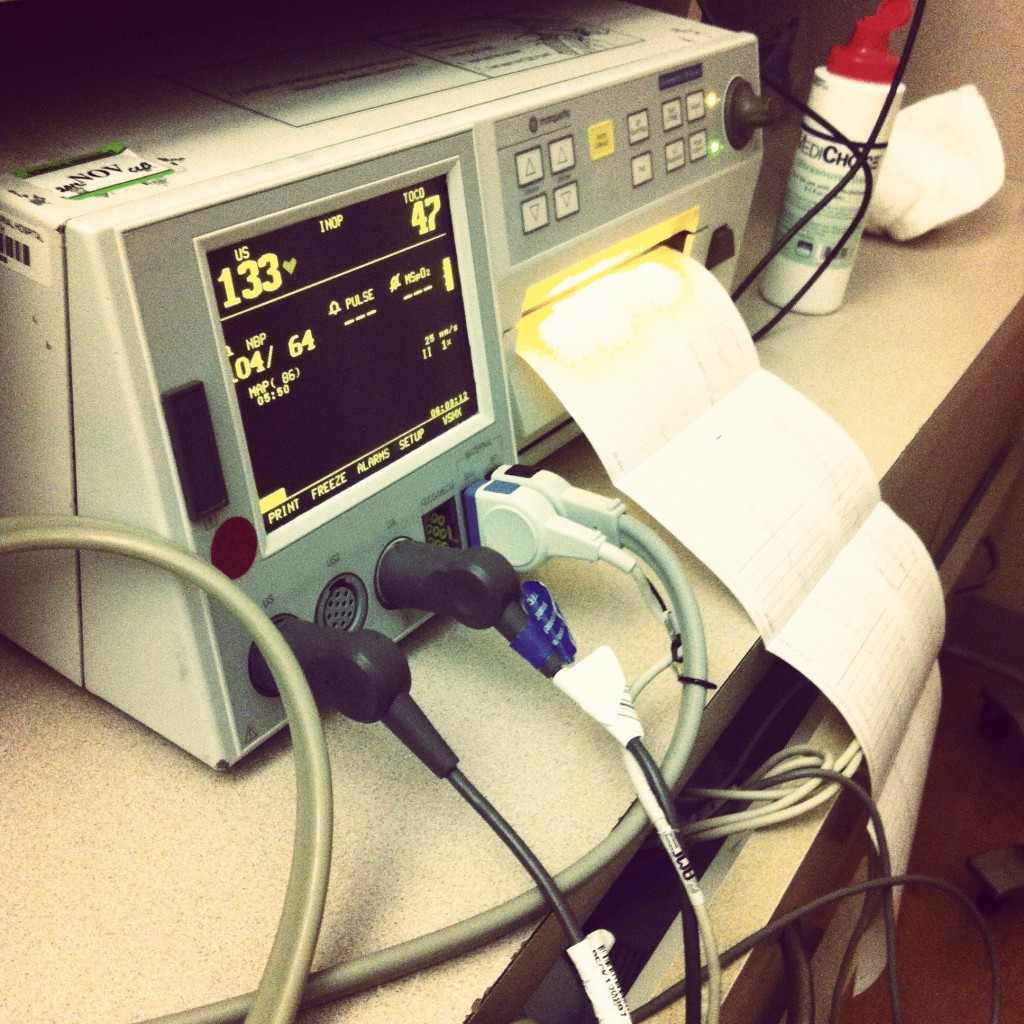 The nurse did what I asked my OB not to do at my appointment earlier this week – checked me “down there.” She confirmed what I did not want to hear – still closed for business. Grr. Then, she took a little sound machine (looks like a cross between a microphone and a vibrator) and put it on the outside of my belly. It made a loud noise and vibration that made the baby JUMP and probably scared the meconium out of him/her. But… that was a great sign that everything was okay. They monitored the baby for about an hour and ruled everything was fine. I left in time to make it to school to give my midterm. My students have no idea how close they were to getting a huge break on that assignment!

This was a first for me. I never had a false alarm trip to the hospital with Kenton and was quite proud of that. In fact, I told Jason repeatedly during that pregnancy, we were not going to the hospital until it was time to actually have a baby.

Do I regret going this week? Nope. Was it overkill? Absolutely not. Would I do it again? In a heartbeat.

I had read this important blog about that (including the comments – especially the one from Lauren). That was replaying in my mind as I made the drive that morning. I also apologized to the nurse who treated me, who responded by basically saying the exact same thing Lauren did. She said that too many women don’t want to “bother” their doctors or the hospital staff and wait until it’s too late. Ugh! Can you imagine?! She said it was no problem to hook me up to a couple of monitors for a bit to make sure everything was okay. And I am so glad I did that.

So, that’s my solemn reminder to anyone reading this – today or in the future, who comes across this post via some random Google search… Get thee to a hospital! Make sure that baby is okay. If something is wrong, you’ll likely never want to forgive yourself for not going – SO, GO.

Okay, lecture over. (I didn’t get to give one in class due to said midterm, so you got one instead.)

The other thing about this week… I’m no longer a good mom. It’s true. I realized that in full force Tuesday – which was just a mommy and me day with Kenton. My energy level is at an all-time low and my physical abilities are limited. I turned my back for mere seconds and my sweet, little, ball of energy son was (quite literally) standing on top of tables. 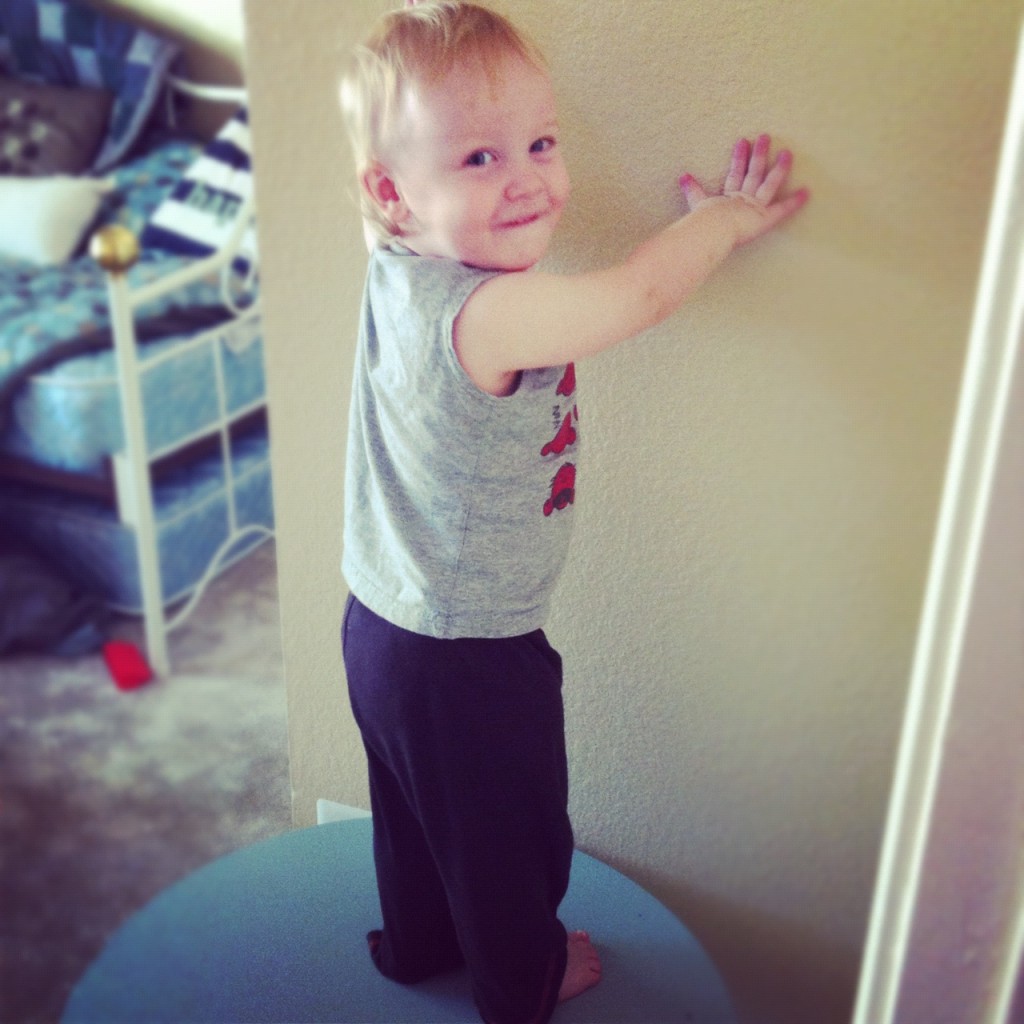 That’s it. I’m done. The white flag is raised. I need my mommy. So, she’s going to be helping me out the next few days and then next Tuesday, my MIL arrives from Maine and we are SO EXCITED that she will be here. She has not seen Kenton since May. So, they have some reconnecting and bonding to do – and I will gladly hand him over so I can concentrate on resting and getting ready to have a baby.

A baby that will hopefully be as mellow on the outside as he/she is on the inside of the womb!