By Michelle Fortin on September 25, 2016 in Just Writing

There’s basically no better time to dust off the ol’ blog after more than year (WHA?) as one of my (fantastic) parenting decisions makes INTERNATIONAL NEWS.

Did you hear about that Arizona mom who called the cops on her 3 year old daughter after she unbuckled her seatbelt?

Yeah, that was me. 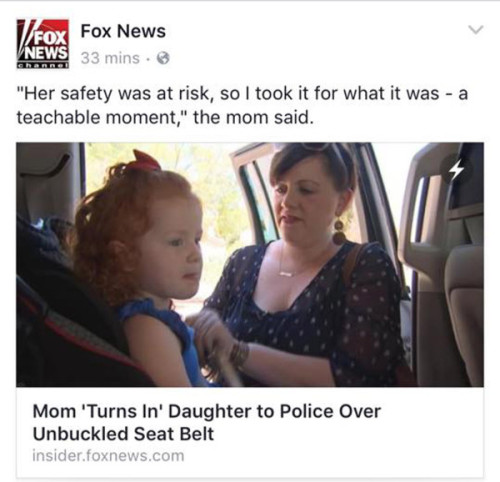 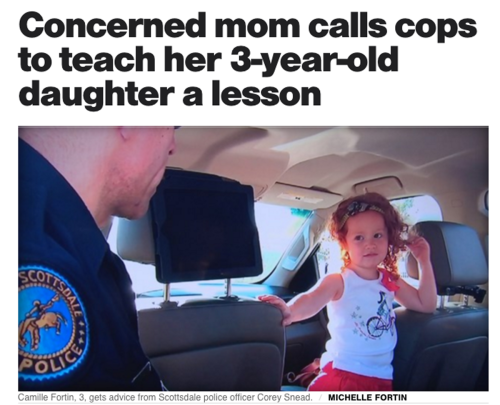 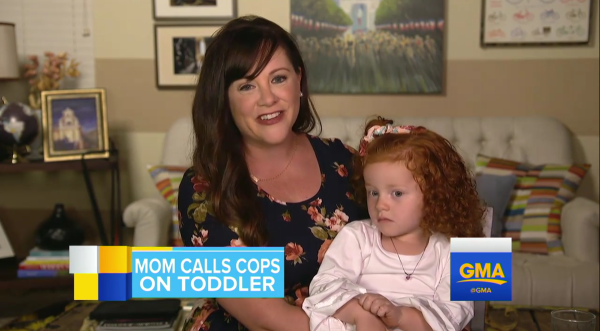 Yep, we even got to go live on GOOD MORNING FREAKING AMERICA with this “story.”

It’s made the news in Canada, Australia and even Japan. I’m sure my name is circulating in other places as well, but to be honest – I lost interest in tracking it. Because it’s really not about me anymore. That’s the strange part and the reason I felt compelled to blog.

I shared most of the story with my friends at City Moms Blog Network. So, you can read that post here. 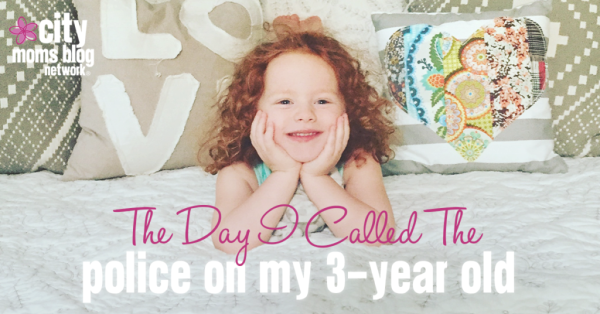 Basically, my preciously spicy nearly-four year old threw an epic tantrum, where she unbuckled her seat belt while I was driving. Why? Honestly, I think she was going to take the wheel and turn that darn car around because she didn’t get something she wanted. Seriously. Thankfully, her older and wiser brother (he’s five) clued me in to the rule-breaking. I pulled over, buckled her back in, gave her a stern warning about not doing that again – but she she was not hearing it. After we got home (with no other seatbelt incidents, I’d like to add – looking at you Inside Edition), I told her again that seatbelt unbuckling is unacceptable. She wasn’t interested in hearing it.

I was upset. Frustrated. Scared.

I had visions of this becoming habitual. Her becoming a serial unbuckler. So, I told her because she broke the law, I was going to have to call the police and turn her in. Her eyes widened, her brother’s jaw dropped open. They didn’t believe me. So, I called the police.

Then, I bragged about it on Facebook. I’m not going to lie – this was (and still is) my proudest parenting moment.

I called the non-emergency line (not 911). I was transferred to a community relations officer. I left him a voice mail. He called me back the next day. I explained what happened – made it clear I did not want to waste his time, but if he was available at some point, could I come to him and have him discuss seat belt safety with daughter? He said yes and I made an appointment to come see him the next day.

He works an early shift, so I (box of bagels in hand) brought the kids down for a chat at 7:00am – before school drop-off. Two officers came out to the parking lot, arms loaded with gifts – stuffed animals, balls, cups, stickers, etc. They gave each child a stuffed animal and took them through a lesson in seatbelt safety. The lesson was age-appropriate, gentle and effective. 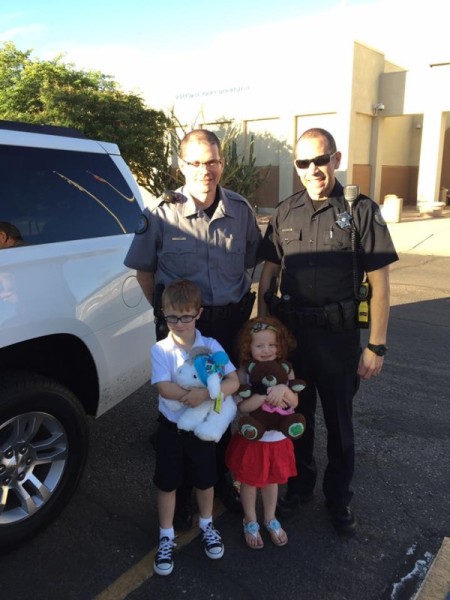 I was in the midst of Junk in the Trunk Vintage Market promotion craziness, so it wasn’t until a day later I posted a quick video snippet of the police “warning” to Facebook to update my “tribe” (all of whom have been ridiculously supportive through all of this madness). 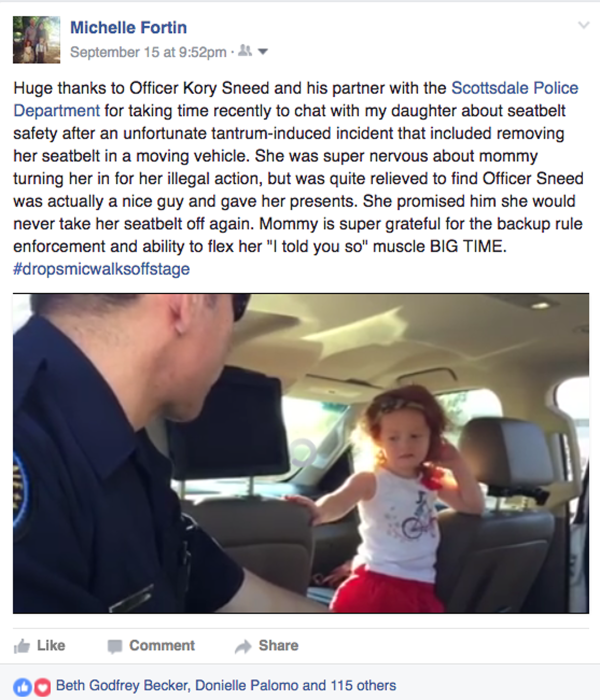 Lesson learned. End of story. SO I THOUGHT. (Cue: insane amounts of laughter).

The NEXT day (now, four days post “incident”) I am with the gals at Junk in the Trunk Vintage Market, while a reporter from 3TV Phoenix (ironically, where I had my first TV job) is reporting live about the event, which started that evening. My phone rings. It’s a producer at 3TV, a friend of mine. He says he saw the Facebook posts about me calling the police about my daughter and thinks it would make a cute story. Did I have his permission to pitch it at the upcoming morning editorial meeting? Sure, why not?! I mean, here I was asking them to come cover my client’s event – the last thing I was going to do was say no to an interview request. Also, I agreed. It was a “cute” story. Later that morning, a reporter came to my house, interviewed Camille and I and the story aired that evening on KTVK Channel 3 and KPHO CBS 5 (a duopoly here in Phoenix).

Again, end of story. It’s a Friday night – a notoriously slow news time. My friends and family were going to get a kick out of this, but I was certain that would be it. However, the headline that went with the online version of the story made me think… maybe that wouldn’t be the case:

Talk about clever writing! I won’t lie – it’s a bit over-dramatic, but not untrue and definitely makes you want to click and learn more.

Well, apparently A TON of people wanted to “click and learn more.” The story started to spread. Other TV stations across the country who had a partnership with KTVK and KPHO aired it. People shared the story on social media. Friends began reporting they had seen the story in North Carolina, Iowa, Tennessee… etc.

Then, the requests started to come into my Facebook messenger folder. TV producers, radio hosts, reporters, writers. They found me! I did radio interviews basically every day the following week. My personal favorite was the nearly nine minutes my favorite local radio program Mac & Gaydos permitted me. You can listen to that here.

Wednesday (now nearly 10 days post-unbuckling), my phone rang ALL.THE.LIVE.LONG.DAY. Reporters and producers from everywhere – so many places I’ve lost count, but including – CBS, ABC, Inside Edition – it was exhausting. I answered every single call. I spoke to every single individual who reached out to me. If given the opportunity to share my story, I took it. Not for self-promotion, but for explanation and to make sure the true facts were out there. (One disturbing version of the story was picked up – saying I called 911 “to the scene” and my daughter was continually clicking out of her seat belt – not any of it factual.) By the end of that day, I was booked to be on Good Morning America the next morning. 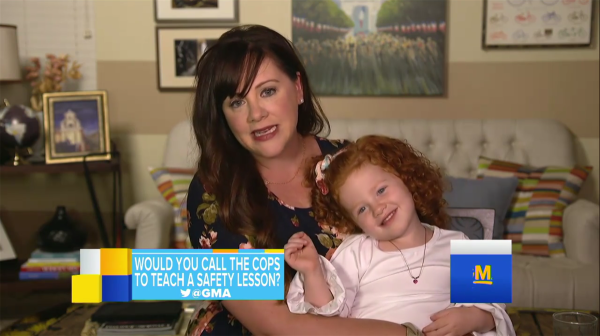 The interview went well. The anchors were supportive. I had an opportunity to get my points across and now I have a good example of how to “control” an interview to share with my clients. 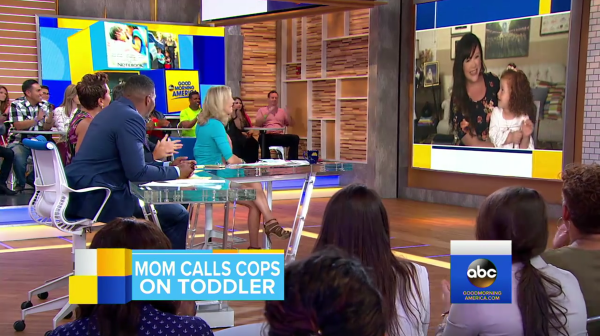 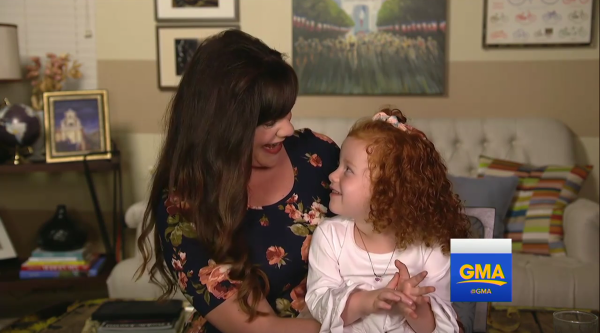 That was it. The crescendo. My phone stopped ringing. I was able to take a much-needed nap that afternoon. I went to bed before 8:00pm two nights in a row. The only major development since then was being covered by uber-blog, Scary Mommy.

So, things have slowed down enough for me to begin processing the experience of going viral. I am just beginning to do that – so I think I’ll share more in a future post. But know this… the “Arizona mom who called the cops on her 3 year old daughter” is me, but it’s not me. I am Michelle Fortin, wife of Jason, mother to Kenton and Camille, child of the one true God. Nothing has changed. My 15 minutes (if you want to call it that) is fizzling. I have a firm foundation under me. Nothing that is said about me will shake me. For that, I am eternally grateful.

Many people want to know – what do I think of the Internet trolls? The strangers who published comments about my lack of parenting skills, inability to control my child, or misuse of police resources (all laughable accusations). I’ll be honest with you – I have no response. Those people do not know me, my child or the situation. Many of them simply read the catchy headline and commented on that. I have the thickest of skin and was not affected by any one of the comments – albeit I admit I only read a few.

I am 100% confident I made the right call in this situation. No resources were wasted (the opposite happened, actually). My children were not “scared straight.” They were taught an important lesson. Their respect for the police has only increased and they think they are “awesome” and “so nice.” Would I do it again? Absolutely.

So, now that this whirlwind seems to be winding down, I’ll get back to work. Since neglecting this blog over the last year, I’ve been focused on building my new PR firm – The Fortin Agency. I am so blessed to have a completely full roster of clients I am privileged to work for.

← Broken Down & Built Up 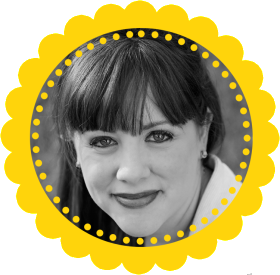